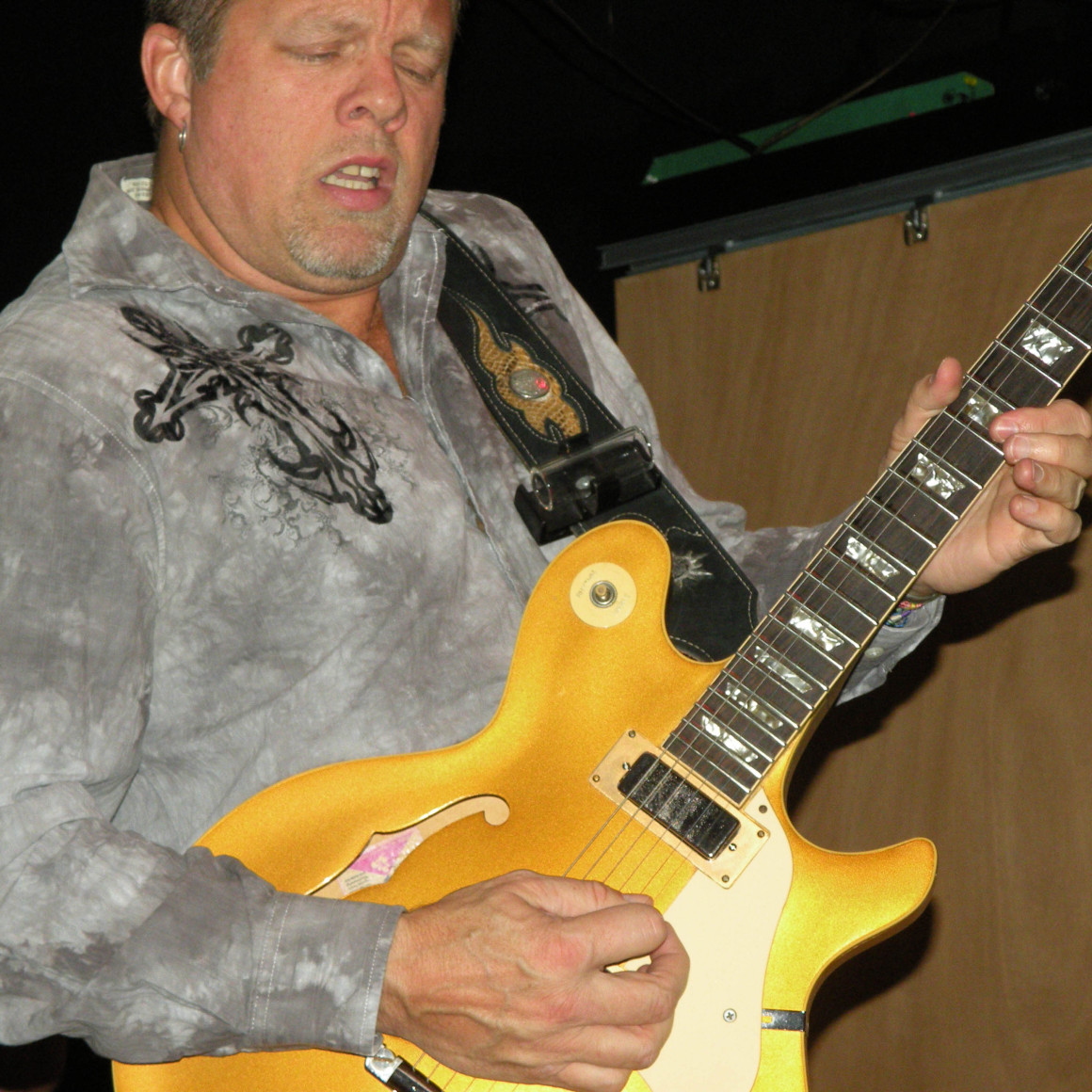 Guitarist Chris Fitz is changing with the times
From guitar slinger to singer/songwriter, Fitz has had to adapt his style and approach but he has always been rooted in the Blues.
by Art Simas 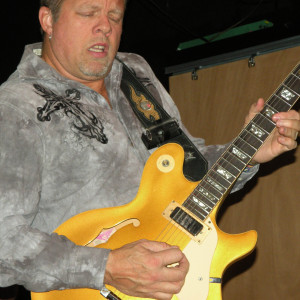 The final gig with Vykki’s band was on a Saturday, and Fitz promptly booked the upcoming Thursday at Waldo’s on Boylston St., near the Prudential Center.
There were a few “minor details” that needed to be addressed. Fitz forgot – if it was going to be called the Chris Fitz Band, that he’d have to sing … and he had never sang a note in his life. He had scramble to find some music, practice practically 24/7, learn enough songs and the lyrics, buy some PA equipment, and, oh yes … he had to find a drummer and a bass player.
“I pulled out some CDs and started writing out the lyrics and practicing them on guitar and set up a mike and started singing. Then went to Daddy’s Junky Music and got some PA equipment.
Ready or not, he was going to pull it off.
“I don’t remember if we had a rehearsal in my kitchen … Looking back I kind of wish I had a recording of it. But then again, I’m sort of glad I didn’t.
After that first gig at Waldo’s I couldn’t talk the next day because I had no vocal technique. I was just singing like I was in the shower but I was in front of good-sized crowd … and then the next week, people came back! I was learning on the job.”
From that point on, Fitz became a salesman again. He was the band leader, songwriter, singer, guitar player, booking agent, manager, promo person, and doing mailings – a serious crash course in how to survive in the music business.
“I had a few things I had going for me: blind enthusiasm, passion for what I wanted to do, very little technique, and very little finesse. It was just about getting it done … and it started to work. People who came to see me in those early years could feel and feed off the energy and enthusiasm of what I was doing. I think that excitement radiated from my performances and got people enthused about it. Musically it wasn’t that good, but every musician will tell you that music and your relationship to it is always a work in progress. It never stops.”
After the first two albums Just Getting Started and This is my Church came out, the CFB eventually morphed from being a balls to the wall power trio into more of a roots-based band that played the original music written by Fitz.
When he started writing, Fitz said he wanted to bridge the gap between traditional 12-bar Blues and the music that he listened to as a kid – Beatles, Stones, and other groups that all wrote their own music. “I had to write music that I could sing honestly and people would believe in it.“

Now that it was his music which was being performed by his band, other options were off the table, even if people requested a particular song when he was playing a gig. If they didn’t like it – tough. “But as the years went by – and I chalk this up to maturity, I became open to playing a request if it was going to make someone happy. Maybe they’d come back with other people the next time I played that room. “I also started moonlighting more, playing with other people and playing solo. That was terrifying because I wanted to be in my comfort zone with the CFB songs. But the economy changed and booking gigs solely for the CFB were getting harder to come by. In the early days, I could have a gig every Thursday, Friday and Saturday. Then Thursday started to disappear and it just was just Friday and Saturday. “So Thursdays evolved into moonlighting where I could pick up work doing other things. And the songwriter in me said, ‘Yes, it’s time to sit on a chair and play and sing by yourself.’ As well as doing other things with other musicians where maybe you’re playing covers … and pretty soon you look up and I’m five years into a music residency in Salem where guest musicians decide what kind of music we’re going to play which could be anything. And I have a lot of fun doing this.”
“I think I became a better musician because of it because it was outside the Blues format and I wanted to learn … and that leads to getting more ideas for my writing (harmony and chord structure and melody) and a whole new world opened up.”
According to Fitz, the traditional Blues scene that was prevalent during the 1990s and into the early 2000s, has been in transition for about a decade. The Blues fan base is getting older, they don’t go out as often, and want to go home earlier. Plus, there is not a dearth of young people who are coming up behind them who are really into Blues. So the audience is shrinking at both ends.
“Yet, I may still be able to play that room because of the amalgamation of what I do now. These days I’m writing more in the JJ Cale mode than in the SRV/Hendrix vibe. Everything is kind of bluesy but still based in roots music. And I still say that everything has Blues in it. “By being more versatile, I found I could book more rooms, have a greater variety and even play classic rock,” he said. “I learned – eventually – to get booked at pig roasts, Bike Week, private parties, on top of all the club gigs. Today, you have to be ready to adapt to the times – and I did it. And I just had my best year ever in 2014, playing nearly 200 gigs, with only about 120 of those being with the Chris Fitz Band.” 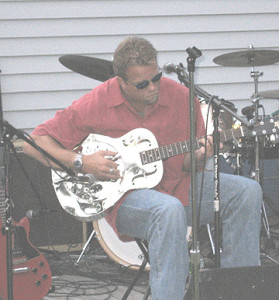 Fitz also took up teaching students about 10 years ago, which at first was kept secret by intention because he still looked upon his profession as a performer and not a teacher. That attitude has also evolved. “Once I became a teacher, I understood that I had to learn about music. I couldn’t teach it if I didn’t understand it myself. So I went back to the books and started re-learning music from a different angle … from an academic viewpoint and why music works the way it does. Plus, my students wanted learn popular songs on the radio – which opened up another world for me. Now I’m a student of music because I want to be and have to be.”
In summing up his 20-year musical career in the Greater Boston area, Fitz said, “I think the best move I made was not to try to be a musician in San Fran, but to come back here.  I’m very satisfied being in the peer group that I’m with – all of the great musicians that are around here, as well as the friends we have. We all get together and collaborate and admire eachother’s work. And the best part is that I get to come home at night to my family every day and enjoy time with them. It’s a very blue-collar operation for me – kind of where I come from in Marblehead, Mass.
“It’s about going out, working hard,   doing the best you can– and   doing what you have to do to make ends meet and becoming better in your craft every day, and that includes teaching.
“I taught myself how to play drums, bass and now I’m learning piano, so that I can do a solo record and play all the instruments. To me, that’s more important than making a million dollars. And a lot of this has to do with my own maturity as a person.
“At the end of the day if my peers had something to say about me, I’d want them to say, ‘He’s a consummate professional.’ That’s the best compliment you can give. That’s been my motivation – I’ve seen great players and I want to be up there with them. That has been such an inspiration to me. I want to play and be with professionals who are in it for all the right reasons, they are the people I surround myself with. And fortunately, there are a lot of them around here.”
Amen.

'Chris Fitz Interview by Art Simas' has no comments