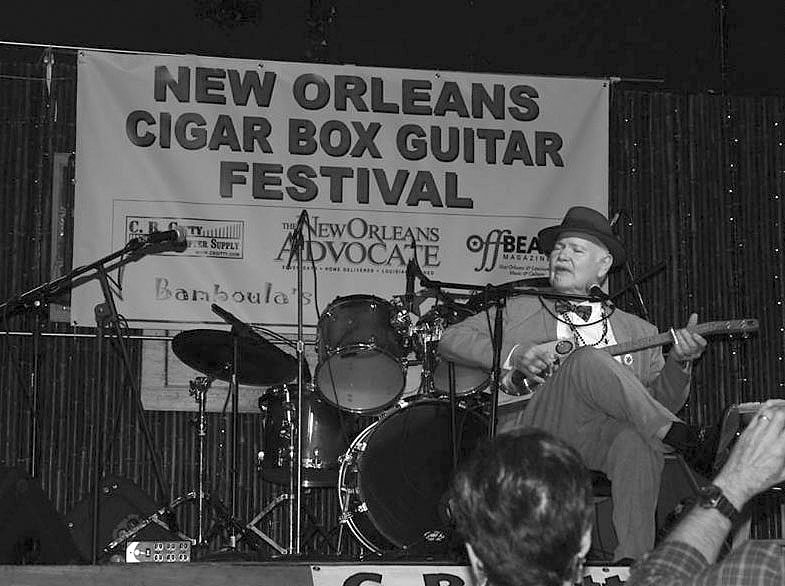 C.B. Gitty’s, the Cigar Box instrument super store, one of the the world’s leading manufacturers, is located in Gonic, NH. Though you rarely see them for sale in mainstream music stores, over the last decade or so there has been quite an underground Cigar Box Guitar revival happening worldwide. https://www.cbgitty.com/
I met the mastermind behind the Cigar Box Gitty factory about a year ago when I was taking a lunch break, from a Blues in the School residency I was doing in an alternative school located just across from CB Gitty’s. A gentleman hurrying out of the main entrance of the restored shoe factory approached me (the school is on a different floor of that building). He asked me if I had a few minutes, he introduced himself as Ben “Gitty” Baker, the proud proprietor of Cigar Box Crafter Supplies, instrument factory. Well…so much for lunch. Ben took me on a tour of his store and I was as captivated by the cavalcade of instruments as if I was Charley in the Chocolate Factory, being led around by Willy Wonka. Maybe “Bubba Smith” from Forest Gump would be a more fitting comparison. Just as Bubba had a 100 different shrimp dishes, Ben had funkified Cigar Box rigs, including a wide variety of assorted 3,4 and 6 string Cigar Box guitars, some fretted, some not, some instead of actual cigar boxes had for resonators, bedpans, shovels, gas cans, mufflers…he also has a few basses, and Cigar Box ukuleles, banjos, Diddley Bows, Canjos, Cigar Box percussion instruments and even fiddles. 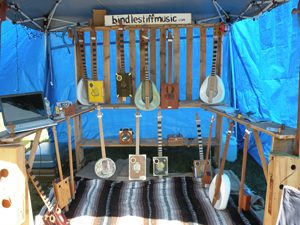 Bindlestiffmusic.com had a booth at the White Mountain Boogie- photo by Diana Shonk
The next thing he told me, surprised me. I was doing a BITS residency in the same old mill as my school. Ben explained that part of his interest in playing and building Cigar Box instruments came out of being lured into a workshop tent by the strange, whining, and human like, singing sounds of some kind of slide instrument, several years ago, at the White Mt. Blues & Boogie Festival in Thornton, N.H. After entering the tent he saw a guy with a thin board, with an Altoids tin serving as a combined bridge and resonator (which also contained a small pickup) a single tuning peg for the 16 gauge “B” string, and a small wooden “nut” which the sting was secured on with the bridge. The player as it turned out was moi. Ben reminded me how the main stage act was playing so loud that I eventually just had to start playing my Diddly Bow slide guitar (just to those attending my show) on top of their songs. If you can’t beat’em join ‘em. Anyhow, we both got a laugh out of his reflection and I was certainly amazed by this memory of that moment.
Ben also conveyed some of his official Cigar Box philosophy  “I feel that in today’s custom, high end guitar market, the vintage guitar market and even some of the imports are way beyond what a lot of people can afford. The Cigar Box market allows almost anybody a very affordable way to own and be able to learn how to play on an inexpensive instrument without a sacrifice of sound quality. If a customer still can’t afford a pre-made guitar they have the choice to buy a kit and assemble it themselves, or buy the individual parts and build it from scratch.”
I have to testify to the accuracy of that statement. I witnessed Ben build a complete 3 string Cigar Box guitar in under 30 minutes at last January’s New Orleans Cigar Box Guitar festival, right in the heart of Frenchmen St.. Ben had a good crowd of Cigar Box guitar novices, other builders, musicians and curious folks watch his nimble fingers put it together right before their eyes and then he played some oh so sweet sounds out of it, as soon as the strings were tuned and stretched.
New Orleans Cigar Box Guitar festival http://neworleanscbg.com/. The festival was a 3 day affair in January with a very diverse array of styles, including some very, down home country Blues by the likes of Jontavius Willis; a Folk/Blues mixed gumbo by Amazie Adams, Hot Jazz by the New Orleans Swinging Gypsies; a very polished R&B oriented set by the Stacy Mitchart Band; house rockin’ meets Cigar Box metal from Shane Speal’s Snake Oil Band and many other talented Cigar Box aficionados and musicians. A great time was had by ALL.

Ben also is the publisher of the definitive on line Cigar Box group called Cigar Box Nation.  There you can get some great insights about the history of the instruments, the current Cigar Box revival, links to a wide assortment of other players and builders, tips, listing of other Cigar Box Festivals and concerts.
I speculate that Cigar Box Guitars and other Cigar Box stringed instruments (including their one string cousin the Diddley Bow) were some of the first heard sounds of the Blues played on a stringed instrument. I first became of aware of Diddley Bow and other Cigar Box guitars after seeing Lonnie Pitchford at the New Orleans Jazz & Heritage Festival. There are some great videos of him on YouTube. I started playing them about twenty years ago. It’s overwhelmingly the favorite of most students in my Blues in the School programs. The kids especially like it when the Diddley Bow talks to them. Through my BITS sojourns to Brazil and Ghana I saw players playing a variety of 1 stringed instruments, some that looked almost indentical to some of my Diddley Bows. One player in Brazil had a three string Diddley Bow and played it with three slides on his left hand fingers.
In closing, here’s a quote from Lighting Hopkin’s on the subject: “I felt the blues was in me, so I went ahead and made me a guitar. I got me a cigar box, I cut me a round hole in the middle of it… and got me a tune out of it. I kept my tune and I played from then on.”