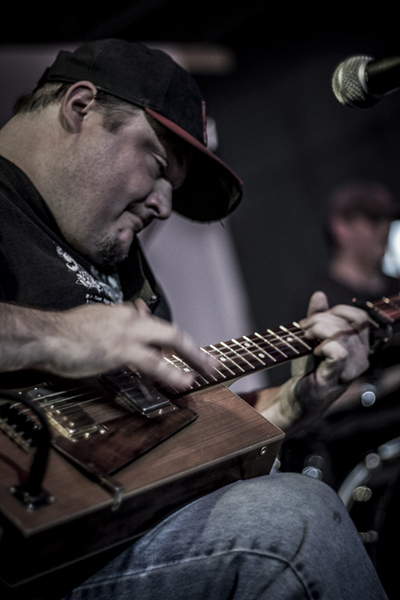 This trio of talented musicians, who take their inspiration from Junior Kimbrough, Robert Burnside, the North Mississippi All Stars, John Lee Hooker and Howlin’ Wolf, don’t care what you call them – just enjoy it.
Led by Jim Chilson on electric guitar, Jay Scheffler on vocals and harmonica, and Chad Rousseau on drums, you can expect a high-energy performance the trio, but a softer touch for a restaurant or small club setting with Chilson on steel resonator and Rousseau on the kit.
Now 43, Chilson said he initially took formal lessons on Jazz bass when he was 15. Soon, he could sight read and was comfortable improvising within a song. “I was getting my chops down and that was helpful in keeping myself in the pocket.” Those lessons would pay off when he switched to electric guitar, and later, the steel resonator.
College was next in line as he received a degree in Civil Engineering from Wentworth Technical Institute in Boston, which definitely comes in handy on his day job as a construction consultant in loss damage assessments.
Chilson joined his first band, Shaky Deal, a standard Blues cover band, when he was about 23 (in the mid-1990s). Later in the decade, he joined Hoodoo Revelator, which is still playing a smattering of gigs in the Gloucester, MA area.
Scheffler, Chilson, and a drummer eventually formed the Ten Foot Polecats in the early 2000s. But the drummer, who was a truck driver, had to give up music because of his schedule. Today, all members of the Polecats have day jobs.
Grounded in the groove, the Polecats hit the road bringing a new but very familiar vibe to traditional Blues audiences as well as a droning one-chord repetition of life’s inequities to younger crowds who couldn’t get enough. The group issued its first album in 2007 produced by Hill Grass Bluebilly Records Entertainment of Austin, Texas. Sterno Soup, is a five-song compilation featuring covers by Junior Kimbrough and John Lee Hooker.
The exposure worked and the group followed up in April 2010 with I Get Blamed for Everything I Do, a full CD or audio play also on the same label. And two years ago the Polecats came out with an all-originals album called Undertow. 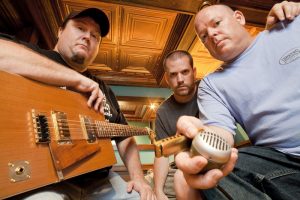 Photo by Peter Lee
Recently back from some gigs in Tennessee over the Labor Day holiday, the band is working through the late summer doldrums by working on its next venture of originals on Hill Grass Bluebilly.
Because of their appeal to different audiences, the Polecats play a variety of venues, from Blues to Country and Roots, to hard Rock establishments. One can often find them at Atwood’s Tavern or the in Plow and Stars in Cambridge; Johnny D’s  in Somerville; Beatniks, the Lucky Dog and Ralph’s in Worcester as well as Nick-a-Nees and Firehouse 13, in Providence RI.
“In 2014, we travelled about 20,000 miles,” Chilson said, which includes the plane trip and ground transportation to and from Europe. They played festivals and gigs in Switzerland, France, Belgium, the Netherlands and Germany.
“We played the Muddy Roots Europe festival in Belgium and the Blues Rules Festival at the foot of the Swiss Alps,” he added. (Check out the guitar work by Chilson on the “Shibble” from YouTube at the Blues Rules Festival).
“We had an amazing time in Europe, and the people treated us like gold,” Chilson said. “I can see why people move over there.”
Stateside, the Polecats mainly toured the East Coast and Midwest because it’s pretty tough to drive out to the West Coast AND get the time off from their day jobs.
“But we certainly have pockets of fans in Baltimore, Philadelphia, Minneapolis, which has an amazing underrated music scene,” Chilson said. “We could play there five nights a week and make good money. And we also have bookings in Blues and Rock clubs in Chicago.”
As far as what the future may hold, Chilson said he’d like to do more local festivals and possibly introduce some songs from the duo side into their live gigs.
“The one thing I’ve noticed with this band is a lot of young kids love what we’re doing, which is kind of good for the future. There is a big appreciation in the Roots community because they also like Country and Bluegrass. Plus they also love the Bukka White, Son House … and those type of Blues, as well as the Mississippi Hill Country Blues, which is more of that repetitive drone groove-oriented.
“We’ll be playing and kids 20 years old are standing next to us screaming in our faces. (Again, see some of their videos on YouTube.) “We love it,” he added. “But we don’t see much of it here in New England. When you go to the Midwest and the South, there’s a lot more enthusiasm for it.”
Like all aspiring musicians, Chilson said he’d love to go higher and be well-known throughout the country. “But it’s a matter of how you get there. And that’s dependent on who you know and who you get tied into… That’s always the toughest thing. We’re always looking to make more contacts in the right places – without losing our shirts.”
To sample their music and get CDs or other recordings of the Ten Foot Polecats, order from the band’s web site:  tenfootpolecats.com; also on I-Tunes, Amazon and https://www.reverbnation.com/redeyeentertainment#!/tenfootpolecats (ranked #1 on the Boston charts).