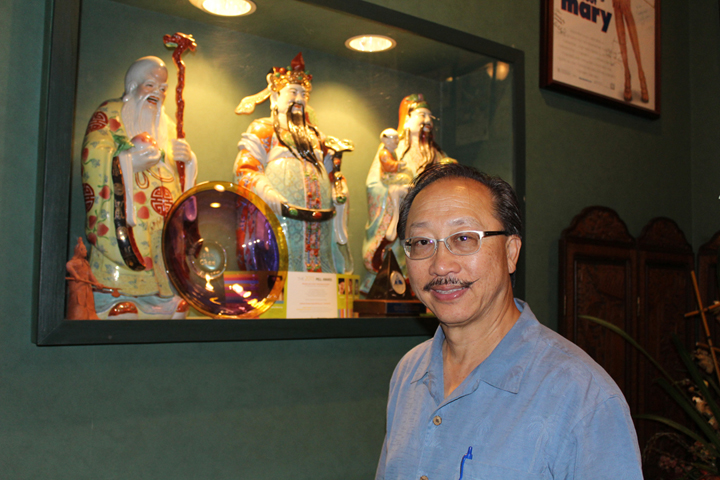 Discover the Arts & Artists of the Chan Dynasty
Blues, Jazz, Comedy, and Culinary Delights
are blended weekly in this Woonsocket institution.
by Art Simas

John Chan, the entrepreneur of Chan’s Fine   Oriental Dining, 267 Main St., Woonsocket, RI, was honored on June 15, 2015 as the recipient of the Rhode Island Pell Award for Excellence in the Arts in a ceremony at the Trinity Repertory Company in Providence. The award is named after the former Rhode Island Senator, Claiborne Pell, who was a champion of the arts and principal sponsor of a 1965 law that established the National Endowment for the Arts and the National Endowment for the Humanities.
So how did a kid, born in Hong Kong, who grew up in the Astoria section of Queens, NY, who now runs a Chinese restaurant in Woonsocket, achieve such an honor for his work in the performance arts – namely Blues and Jazz?
He had an early attraction to the arts as a child, learning classic Chinese painting from his grandfather while in Hong Kong, then photography, and more recently, his own creations in watercolor paintings that welcome visitors to his restaurant and the intimate Four Seasons Jazz and Blues Club that features national and regional entertainment every week.
In a 2011 article by American Blues Magazine, Peter Neff, of Chepachet, RI, said, “John Chan provided a cultural anchor in Woonsocket” attracting people from southeastern Massachusetts, Connecticut and Rhode Island for more than 25 years. “Musicians would have had nowhere else to play [around here] without him … He held it together.”
Also in 2011, the Blues Foundation chose Chan’s for its Keeping the Blues Alive award in recognition of its dedication to preserving the legacy of American Jazz and Blues music history.
John had two special presenters for his Pell Award for Excellence in the Arts: longtime friend and pianist Mike Renzi, who worked with Lena Horne, Jack Jones, Mel Torme, Tony Bennett, all the greats in the music business, and Bobby Farrelly, of the Farrelly Brothers filmmakers. Unfortunately, Peter Farrelly couldn’t make the trip from California due to other business considerations. “The award is very special because I provided a place for performing arts and visual arts as well,” John said. 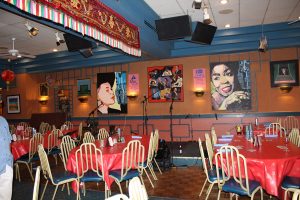 The halls and walls of the Four Seasons Jazz and Blues Club feature the works of George Frayne, better known as Commander Cody; the unmistakable and unique strokes of Robert Hamilton, a teacher and artist at the Rhode Island School of Design in the 1950s though ‘70s; Country Blues guitarist Paul Geremia, songwriter, performer and painter Eric von Schmidt, and posters commemorating Chan’s 25th anniversary in 2011, by George and Patty Sargent of Dragonfly Studios in Woonsocket, Rhode Island.
Adding to the visual arts of photographs and paintings on the walls of Chan’s is John’s own impressionistic works in watercolor. Bridges, seascapes, depictions of musicians, landscapes and caricatures are dabbled throughout the premises. John has been immersed into the art for the past 15 years. 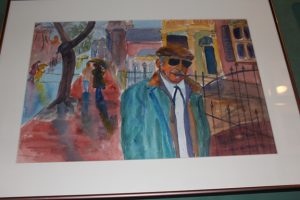 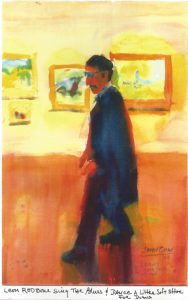 Photography and recording thousands of musical moments also comprise a huge share of John Chan’s love of art in general. In fact, he has more than 3,000 recordings of shows spanning decades of entertainment. Most were aired on the local Cox cable channel.
And speaking of recording, the first live recording at Chan’s featured vocalist Rebecca Parris, the chanteuse of New England Jazz at the time, recorded live in 1985. Others who have recorded include Nick Moss (Live at Chan’s, which was nominated for record of the year in 2007, and Live at Chan’s Vol. 2), brother Joe Moss, Bellevue Cadillac, Young Neal and the Vipers, Diane Blue and Jimmy “Two Suits” Capone. The undisputed winner of “live at Chan’s” is saxophonist Dan Moretti, who recorded at least 18 albums at Chan’s Four Seasons Jazz and Blues Club, which opened in 1986. The room was once a bank, and the main vault (its multi-ton door still intact), now serves as the green room for the artists.
More recently at the 2015 Blues Music Award ceremonies in Memphis earlier this year, John Hammond won for Best Acoustic Blues Album of the Year for TIMELESS which was recorded live at Chan’s last year.
So what’s his secret for success? Chan said the business “has about 1,500 followers on Facebook and we’re on Constant Contact. But it hasn’t been easy.  You have to keep on top of things. In 2008, people weren’t buying tickets until the last minute,” which made it difficult to predict the amount of staff needed.
“I find that the competition is stiffer today than in the past whereas we were the only venue in the area. Today, more theaters are offering live music in Rhode Island and there is The Narrows Center for the Arts in Fall River, MA, which seats about 375-400. So there are more choices for the consumer.  For things evolve so you must be creative,” he said.
“And I’ve made a lot of sacrifices over the years … I’ve been here since I was 15. Back then, I’d take orders in between doing my homework; washed dishes before there were mechanical dishwashers; take orders; work the fryolators; prepare the menus, and do other ‘back house’ jobs. It was fun and a great experience. But 50 years is a long time,” John said, who is now 64.
“Today, I’m looking for a knight who will carry on the tradition.” Chan said he recently read an article in the New York Times about Blue Note looking to establish its brand in Milan, Italy, Hawaii, and China, northeast of Beijing. “That wouldn’t be a bad idea (to be affiliated with Blue Note). Maybe they would buy me out and I’d work for them. “It would be a shame if I retired and this placed closed … we’ll see what happens.” http://www.chanseggrollsandjazz.com/index.html