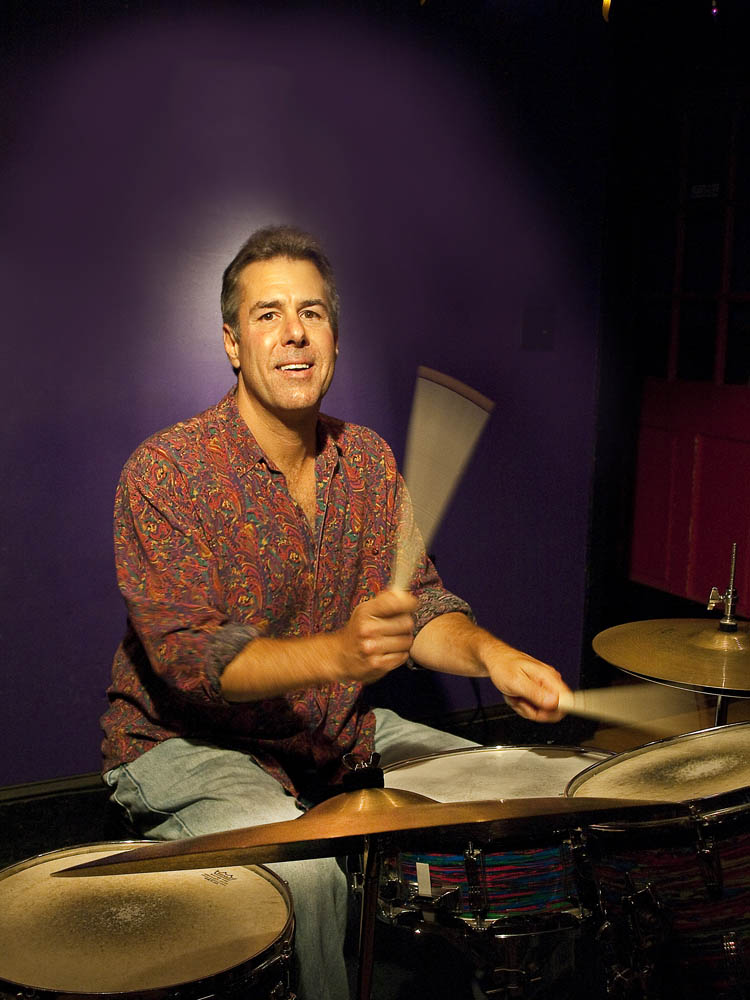 By Art Simas Published in June/July 2016  #219 The Blues Audience newsletter.

When the Love Dogs play those first notes at a gig, the audience has no choice but to succumb to a joyful light-headedness accompanied by an infectious smile on every face. There is no doubt – this is the beginning of laissez les bons temps rouler! for the next few hours.
Yet how can that same feeling remain within the members of the band for more than twenty two years? And more amazingly, most have remained on that initial musical journey that began in 1994.
For front man and leader, Eddie Scheer, it all starts with a collective love of all varieties of music, and AM radio in the 1960s. “We’re all of similar ages and we all came up listening to AM radio. In those days you heard everything that you could possibly hear… such as Sly and the Family Stone, the next song is from The Who, the Stones, then Barbara Streisand or Diana Ross, then Dolly Parton, and on and on. So we all have that appreciation for all different styles of music.
“We know hundreds and hundreds of songs,” Scheer continued. “But in just about all of our performances, we’ll play something that is never in any set list. It’s that spirit of adventure that we all have which is a big part of what keeps us going.
“For example, in a recent dance night gig in Leominster, which we do about 4 or 5 times a year, we played 4 or 5 songs that we have never played before. Someone might come up with an idea and we all make it happen.” 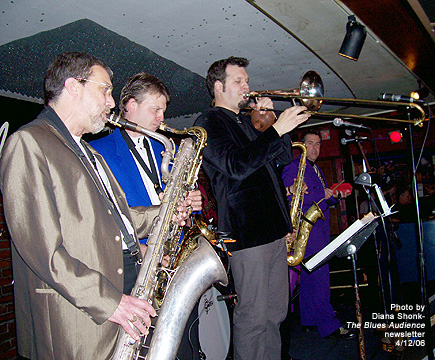 In the beginning, when he was dreaming about putting a band together, Scheer said, “I was simply thinking about the people who I thought would fit my musical ideas well. And look what happened. It’s just amazing that we’re all still together after all this time. “If you had asked me twenty two years ago if we’d have the same line up, I would have said, ‘No way!’ ”
Original and/or ongoing Love Dogs include Alizon Lissance on keyboards and vocals; Glenn Shambroom on guitar and baritone sax; Myanna on tenor and alto sax; Steve Brown on drums; Scheer on vocals and percussion, and Jesse Williams on bass from 1994 to 2000. Randy Bramwell took over the bass duties in 2001. Former players and current fill-in guests include: Jesse Williams, Sax Gordon Beadle, Mario Perrett, Bruce McGrath and Mark Paquin.
Scheer said everyone who ever played with the Love Dogs “came to play” and have fun every gig. “Everyone brings different qualities to the band. And I’m lucky that it’s all meshed together as well as it has. It’s kind of unbelievable to tell you the truth.” He added, “Steve Brown is my favorite drummer because he plays the jump and New Orleans stuff better than anyone; plus he’s the comedian of the group. Alizon has her own show playing keyboards, accordion and vocals. On any given night she’ll bring her own material … so she’s got her own thing going and is so talented.
“I’ve been lucky to play with Glenn (Shambroom) for over thirty years. Because he plays guitar and baritone sax, he’s like two different musicians. On the horn he’s more of a Jazz guy with a Gerry Mulligan style; on the guitar he’s so great  with the early Rock stuff from Chuck Berry and the Beatles, and he’s also a good Blues guitarist. He’s really the one who has enabled us to do so many different things musically. “Myanna is usually the featured soloist on alto and tenor sax. She’s a tremendously energetic and very creative musician. And Randy is the ‘Iron Man’ who holds it all together. When we don’t know where to go (musically), we all follow his lead,” Scheer said.
In the early years, Scheer said the Love Dogs spent many years on the road. From 1996 to 2002, it was no surprise if many or all of the Love Dogs would be lounging and sleeping on a friend-of-a-friend-of a friend’s couch, floor or assorted designer recliners just doing whatever needed to be done to keep playing and reaching new audiences from coast to coast.
From those experiences (over and over again), Scheer said, “We got to know each other really really well. It was like a marriage – only there were 6 people in the marriage.” Alas (and Thank God!!) “We’re all older now and we can’t do that kind of stuff anymore … I’ve got 2 daughters who are still pretty young, so I’m not away from home very much.  If you’re a trio or a quartet, you may be able to make it happen, but it’s a lot harder now for a bigger band to survive – financially – on the road. Eddie added, “We’ve been lucky. We’ve been to Europe about 5 times and had a blast over there, and we have a pretty big following on the West Coast, especially in Oregon and Washington.” 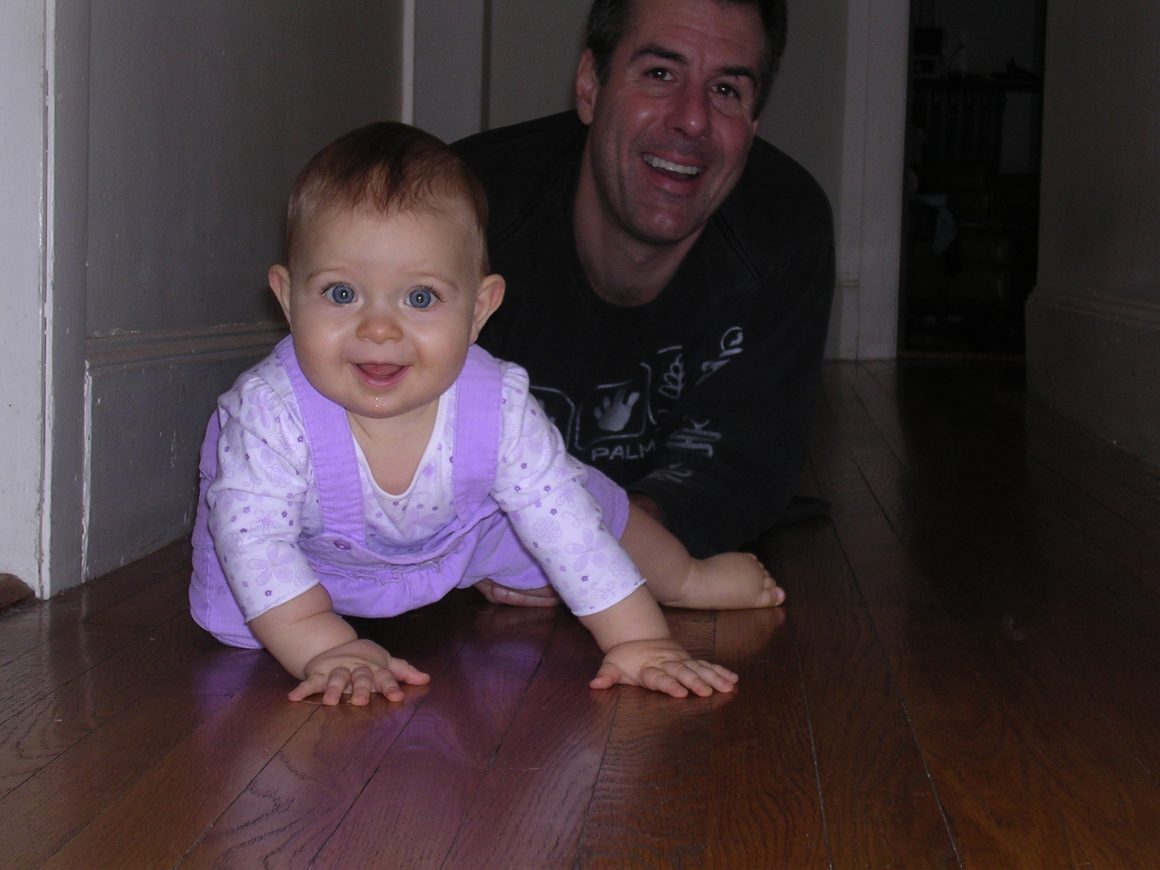 The Creative Process
Creating music has never been a chore or a burden for Eddie. “That’s my passion. That’s what I live for. I’m very lucky that I found this thing at a very young age and have been fortunate to get good enough to do it professionally and make it work for all these years. I’m eternally grateful in many ways, including that I have this great group of people that I can play with. I never take that for granted,” he added.
“Most of the time I’ll come to the band with an idea of a song and we’ll all work it out on stage. We’ll play something a couple of times and we’ll talk about our ideas, what to put in and decide what sounds good and what doesn’t sound good.
“When we are working on horn parts, we’ll usually sit down and hash out what we’re going to do.  And if we’re doing a jump or Big Band tune, it’s those types of arrangements that we have to work out ahead of time and write charts for. But some of the stuff we just go on the fly and have fun with. I may be the ringleader of the band but it’s definitely a democratic process,” Scheer said.
What the audience sees on stage is the result of a well-planned but totally organic process of give-and-take and knowing what goes where, when.  Scheer admitted, “We really don’t rehearse anymore,” (that’s because they really don’t have to).
The band has several early summer gigs coming up in parks or local bandstands … Belmont, Sudbury, Hampstead, NH and more will be on the way. Check their listing on page six. “These type of gigs are a nice shot in the arm for us because playing for an all ages crowd is a lot of fun.” Scheer said. “That’s another secret to the band – we can do all different types of gigs and can we come up with songs all night long. We can play a Blues club and play mostly stuff off our records or we can play a private party and play Rock and Soul all afternoon. It’s the variety that makes it work.”
Besides the gigs with the Love Dogs, Scheer co-coordinates several other collaborative ventures with many of his musical colleagues. On Tuesdays from 8 to 11: 30 p.m., you’ll find Ed and fellow Love Dog Randy Bramwell at the helm of the Corrib in Brighton Center playing hosts to a Best of Boston musical all stars. For instance, a few weeks ago he had Cheryl Arena, Cheryl Arruda and Danielle Miraglia doing girl group tunes; then the following week it was duo guitar masters, Roberto Morbioli from Italy and Boston’s Rick Russell. Another week featured Lydia Warren, PhD, and Mike Welch; Sax Gordon Beadle and Mike DiBari … and it goes on and on. “Eddie Scheer’s Tuesday Night All Stars” originated originated in 2010 at the former (and much missed), Smoken’ Joe’s across the street. Now in its sixth year, Tuesday night at the Corrib is the place to be.

Being a Leader
“I think being a leader has to do with having a vision of what you want to happen, and to visualize things sonically. You also have to do the prep work for the other musicians, to steer the ideas as to how you want things to go. “With the Love Dogs early on, I wrote a lot of charts and I sat down at the piano and worked out a lot of stuff. Now it’s more spontaneous because everyone else is so good at it.
“In many ways, I am the least musically literate musician in the band – being a drummer and a singer. I’m 90% self-taught and was on the learn-as-you-earn program playing by the seat of my pants,” he said.
Getting back to the Tuesday night gigs at the Corrib, a few weeks ago Scheer said there was a tribute night to Levon Helm. “I got Big Jack Ward, who knew Levon, and Jimmy Ryan, a terrific mandolin player, and Larry Luddeke, a great keyboard player and I said, ‘Let’s do a bunch of Band tunes.’ It was a lot of work, but it was only possible because we put in the prep work ahead of time,” Scheer said. 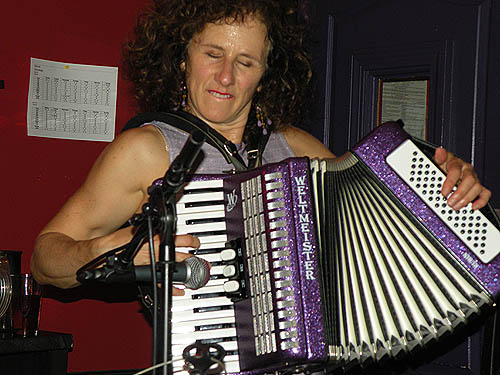 Scheer’s other collaborations include weekends with the Dog House All Stars, featuring Mario Perrett, Rick Russell, Randy Bramwell and more recently, . John Moriconi (Johnny Blue Horn).Another project is The Charles River Reprobates with Scheer, Danielle Miraglia, Jimmy Ryan, Bob Enik and Chris Leadbetter. Eddie said “it’s almost like a Bluegrass band where we can all trade vocals and harmonize.”
“It’s fun to be the focal point of a band… but it’s also great not to be the focal point of a band, too. I feel that balance is important to me. I take pride in being a good sideman, too, where I can back up others, chime in on some harmonies or help with arrangement stuff,” he added.
“I’ve also been working a lot with Diane Blue; playing drums with Cheryl Aruda; playing with Joe Bargar, Lisa Marie, Johnny Juxo and many others all whom I never got to play with when the Love Dogs were working full time. To me there is tremendous joy in being part of this community.”

“I feel very, very lucky to be living here in New England … and there are other communities like this around the country. Certainly in the Blues world, Scheer said, “there are very few of us who are getting rich. Everyone is doing it because they love the music. And when you have that, then you have a genuine collaborative effort – especially those of us who have been doing it for a long time.”
For those who want to pursue music as a career, Eddie has some sage advice, prompted by his own experience.
“Back at a pretty young age I said to myself: I could spend a lot of time doing something I don’t enjoy, hoping there will be a big payoff down the line – whether it be financial or in another way. Or I could do something that brings me joy every day and even if I never make a lot of money or never get famous, I’ve spent my life doing something that I enjoy.”
“That still rings true today … I’ve got my family and I’ve got my music … I’m very fulfilled and that includes having the luxury of being able to spend a lot of time being at home … to have that balance in my life is very important to me and certainly makes me very happy.” 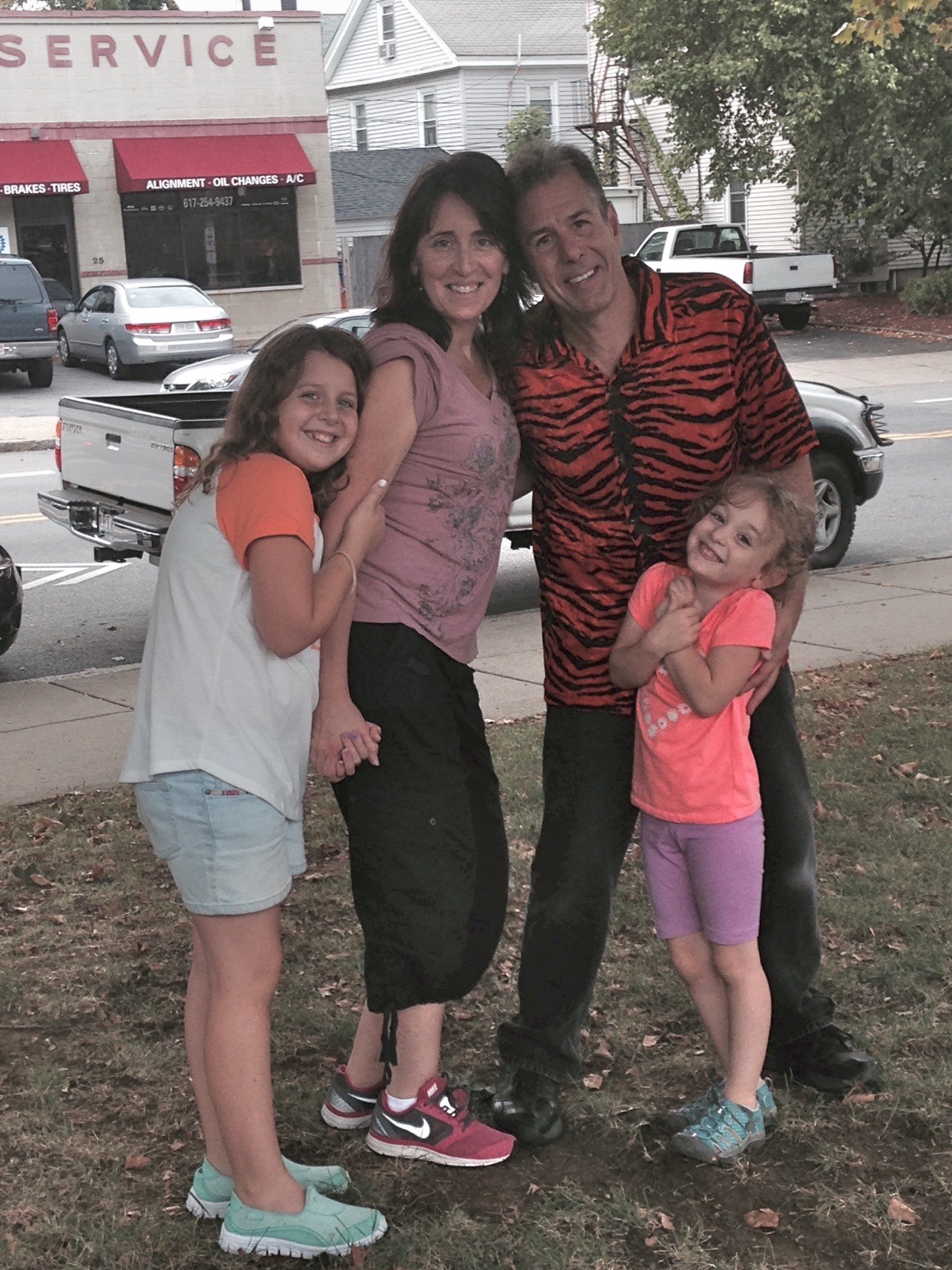