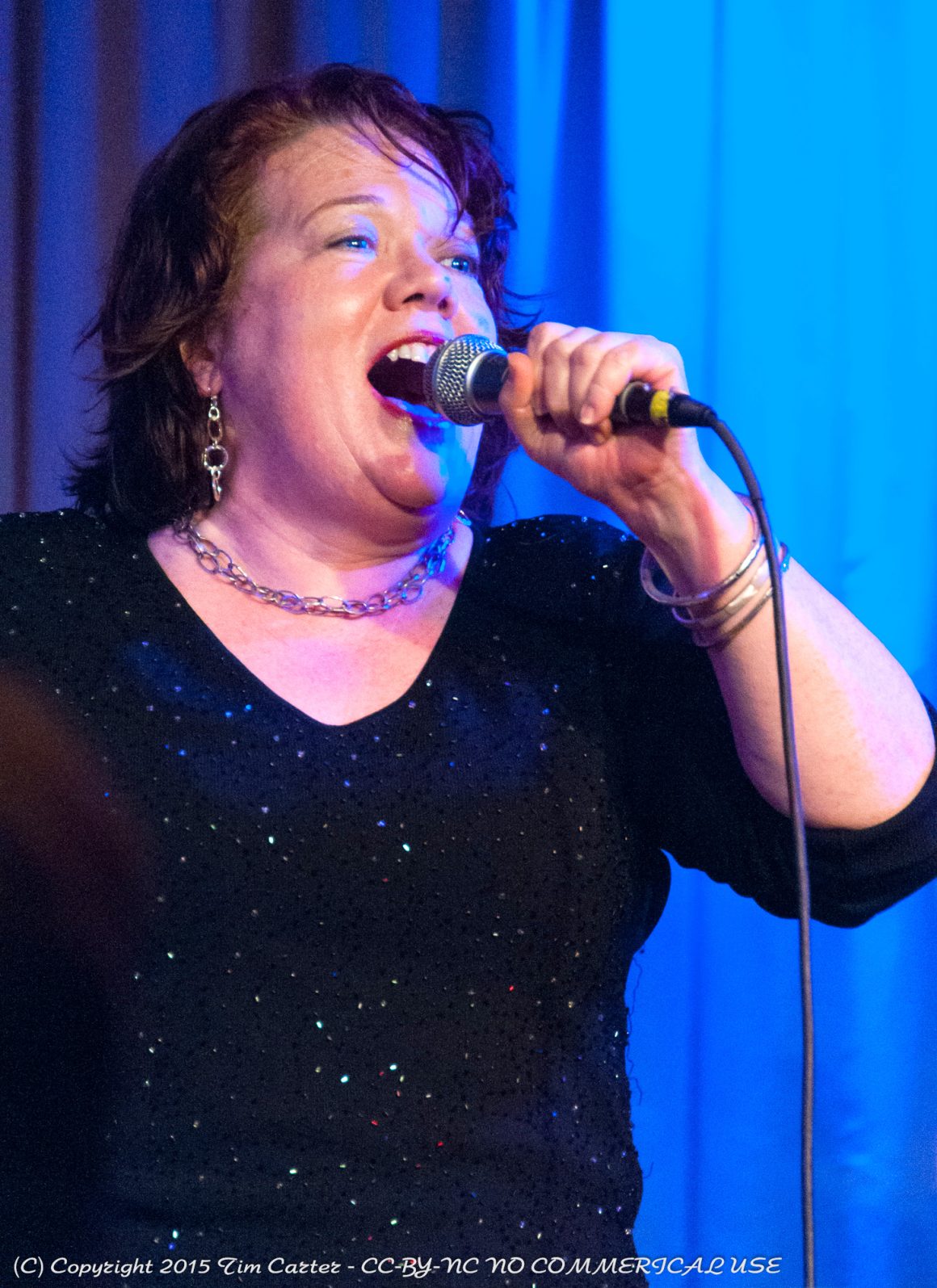 Being the Bandleader
Definitely Has Headaches and Heartache
by Art Simas

Published in The Blues Audience #216 December/January 2016

If you look up Michelle Willson’s biography in AllMusic.com, it is consists of a total of 89 words. Obviously, no one ever spoke to Michelle because she has a lot to say about being in the music business, life in the 21st century and survival.

After a 10-year break from the grind of being a top-line vocalist with her Evil Gal Festival Orchestra, Michelle Willson is back – minus the orchestra, the headaches of being the bandleader, main negotiator, and the worries that come with a job that has little or no emotional or social security, not to mention the disproportionate equation of hours worked vs. actual cash placed in one’s bank account. “I’m in my 50s now and as an adult, I’ve earned enough money to support myself approximately three years out of my life,” she said. “The rest of my adult life I’ve been living through the kindness of others.”
Today, Willson is finally doing what she was has always wanted to do – having fun with a career based on music and that includes singing and collaborating with others such as her own trio of Mike Mele, Sven Larson and Zac Casher; guest appearances with Dr. John, the Ken Clark Organ Trio, Toni Lynn Washington, Darrell Nulisch, Anthony Geraci, Sugar Ray and the Bluetones and many others.
She also has two radio shows on Worcester’s WICN 90.5FM, The Blend, Noon to 3pm, Monday through Thursday, and Jazz N’ Blue, 4-7pm, Saturday evening. Unlocking the vaults of precious musical treasures you’ll hear the earliest creators of Jazz, soulful Rhythm and Blues alongside a wide variety of today’s Jazz and Blues artists.”
A few years ago she hosted two weekly programs, “Voices of Jazz” and “Jazz n’ Blue” at the station. But when she heard WICN was looking for DJs last October and, although she was living in Merrimack, NH, she was determined to get the gig. “I had a 150-mile commute to work on three days. Then a few months ago, they decided to make it Monday through Friday. So I decided to move closer and live in Massachusetts.”

ARTS MANAGEMENT AT U MASS
More recently in September, Willson decided to go back to school at the University of Massachusetts’ University Without Walls online campus to get her bachelor’s degree in Arts Management. She wants to be able to keep working and find funding to bring art (in all forms) into the forefront in people’s lives, and help those who are already working to achieve that goal.
Regarding music, Willson said, “People need to be aware of the value of what it is they are listening to in order to be encouraged to pay for it.”
When she did tours of Europe in the 1990s, Willson said culture and art was a big part of their daily lives. “People will gather at the local performance space and everyone buys a subscription to the Saturday night series. One week it might be Russian skating bears and the next week it was American Blues musicians. It didn’t matter. I think they have a much greater appreciation.
“Here in America we’re slowly starting to accommodate the arts into our communities – what was once a vacant fire station may be converted into a performance space,” she added. The non-profit Narrows Center for the Arts in Fall River is an example of that metamorphosis. Through the efforts of local visionaries and benefactors, an old factory mill was renovated to hold visual, creative and musical arts of every genre on the third floor of the building.
Other examples of a rising arts appreciation is the resurgence of arts in the communities is the reclamation of a Norwood, Mass. theater, the renovation and full plate of performances at the Stadium Theater in Woonsocket, RI, and the construction of the Hanover Theatre for the Performing Arts in downtown Worcester.
“I’m taking three courses this semester and I’ll probably get some credits for life experiences within the field, such as booking experience and doing business in 17 different countries, as well as the performance aspects such as bandleading and songwriting. That will all shake out after this semester and I’ll have a better idea of how many credits I’ll need to graduate.” Usually one needs 120 credits to graduate with a Bachelor of Arts.
In 1978, she dropped out of the main campus at UMass-Amherst to start her first band. But she did accrue some credits as an undergrad at that time. “I’ve been thinking about doing this since 2000. I received some financial aid and additional aid in a loan to help pay for rent. My plan is to stay in school until I graduate because if you stay in school, you don’t have to start paying back the loans. So I want to keep going until I’m done,” she said. “It’s certainly a good investment but it’s the most money I’ve ever invested in anything.
“I’ve taken over Joe Turner’s title of being the ‘World’s Oldest Teenager.’ I’m doing pretty well but it is a lot of work but I’m just loving it. And I’m learning a lot about computers and technology.”
Can’t Top This Performance
When she burst on to the Boston Blues scene in the early 1990s, Willson assembled a group of talented musicians and shocked the city by winning the annual Blues talent competition at Harpers Ferry … and then winning the national title in Memphis. That led to a record contract with Rounder Records of Cambridge and co-founder Marian Leighton Levy, who became a mentor for her. She cranked out a record every other year beginning in 1994 – 1998.
In 1998 in New Orleans after making the third record, TRYING TO MAKE A LITTLE LOVE, Willson said, “I remember thinking, just casually, that I might be in trouble somehow because I felt that I should be enjoying myself more than what I was experiencing, and that something must be wrong. Then I just forgot about it.”
The pressure of doing everything for the band was becoming too stressful. But she had to keep going. “I had no idea what was happening or going on. I didn’t know how to handle it. I had no help and I was just seriously floundering. “I didn’t have any practical experience. I was right at the tail end of the record companies’ practices of doing everything for you (as a band) and they sort of took care of things.
“I was simply following in a long time-honored tradition of talent wherein management puts you on the stage; they prop you up and then they go home. The talent never did any of the behind-the-scenes work that needs to be done today on your own.”
After 2001 and 9/11, the bottom just fell out of everything, Willson said. “The corporate support was gone and everything was just completely different. It was too much for me and I didn’t realize I was in serious trouble. And I basically crashed and burned for a few years.” In 2005, she said she started to poke her head out of the hole she was in. “I started to feel good and wanted to start gigging again. But I was so far behind.
“I took a couple of years to figure it out.  Around 2010, I started to put together a Dinah Washington tribute show- that was what I knew best– and thought it might be cool to do just Dinah Washington. So I did it a few times but again, I didn’t know how to produce it properly.

“I know if you do hang in there and strip things down to the bare essence, you’ll think about how great it is to be alive. Start there and work your way up. That’s what happened for me.” 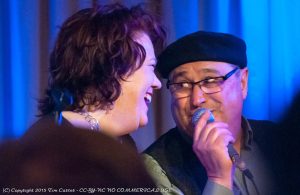 This was a CD pre-release show at The Bull Run in Shirley, MA. A veritable who’s who of blues in Boston — what a great show!

A NEW RECORD
“Then I decided that I had to make a new record 10 years after my last one. But the record companies weren’t there. “I was floundering around and asking people for help. But I was determined to keep going until it worked out. The next thing I knew, I was booked at Scullers and arranged the show, and raised the money to produce a live CD, and put out FORTUNE COOKIE.” Since it was live, Willson thought it would cut down on production costs. But she quickly learned that potential producers tend not to like live recordings because, as a general rule, the artist is recording stuff that has already performed or recorded. “So that’s what they thought they were going to get. It didn’t matter that the material was totally new for me. They didn’t care and didn’t want any part of it,” she said. “Bruce Iglauer of Alligator told me, ‘It wasn’t exciting and it wasn’t evil.’ “
“In retrospect,” Willson said, “because everything was on me, I realized I was a little bit too cautious in the performance and didn’t lead out with the best song. It didn’t have that exuberant ‘thing’ that people want on a live recording to grab them.”
Over the last few years, Willson realized that it was the pressure of being the bandleader and being under the gun and scrutinized on every decision that was the eating away at her. “The more I figured it out, the more I came to realize that I really didn’t want to be doing that anymore because being the leader took all of the joy out of making music and removed every speck of fun.
“I had been to that place before when it was too much. Back then I’d throw up my hands and declare ‘That’s it. I’m done.’ But this time around was different (2014). “At the same time, I had some very serious health challenges, which I never had before. It was a real eye-opener to be staring at your own mortality, and then things start to make a lot of sense. I realized I didn’t have any more time to waste and I couldn’t afford to spend time any more time being miserable. That’s when I truly realized that the whole bandleader thing was not for me as a daily way of life.”
Willson added that she was glad she endured the pressure of the business end. “I proved to myself that I could do it, but I also know that life is too short to be in that mood all the time. So you have to be a person who is not as deeply affected as I am. And that’s changed my perspective a great deal. I would very much like to find a collaborative situation now where I can do what I’m good at, and help other people. “I know if you do hang in there and strip things down to the bare essence, you’ll think about how great it is to be alive. Start there and work your way up. That’s what happened for me.”