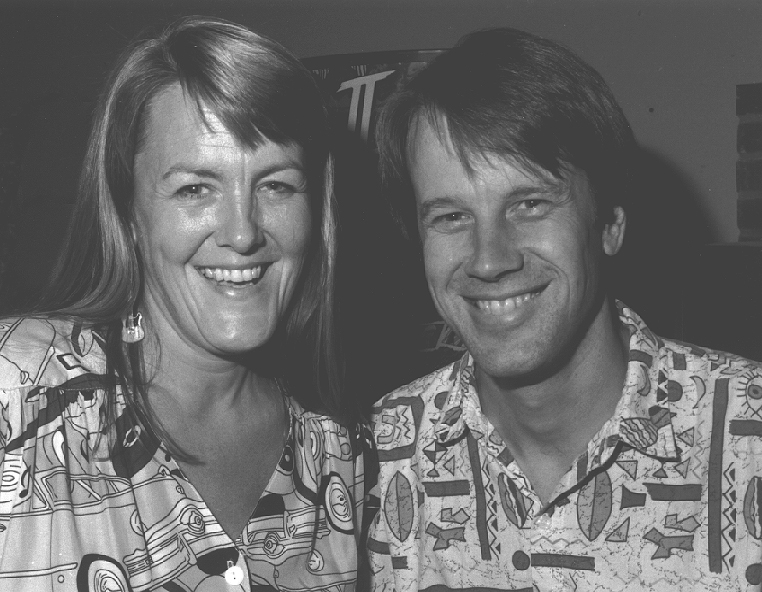 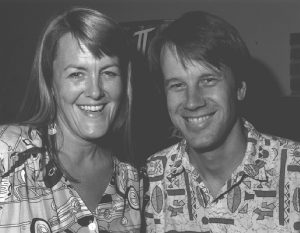 Many of us love music it is an extremely important element in our lives. We can be categorized as either as an admirer of a genre, or as a lyrical creator, guided by an instrument. Yet to all who share this affinity, it is close to the heart and soul of who we are.

And then there are those who work to encourage the talents of others–people who create opportunities and open doors for those who choose to make a living from cerebral notes, phrasings and the art of channeling human emotion by plucking a string, blowing a horn or mastering black and white ivories on a key board.

For 25 years (and counting) Diana Shonk, as a musician and publisher of The Blues Audience newsletter, molded these two passions with her own love for live music and the musicians who tirelessly strive to survive to make a living in New England.

While this may be the last print edition of the newsletter, it will morph into an online presence intact with schedules of bands, clubs and other informative content in January. As the cliché goes, “the beat goes on.”

The concept of the newsletter began as a very practical idea – get as many bands’ schedules into the homes and hands of as many people who like to go out as possible. Call it a confluence of circumstance, but something had to be done in the early 1990s.

Playing music for a living is never an easy choice. And Diana realized that early on. Her brother, Peter Shonk, had already made that decision and was already involved in making and playing Blues at the plethera of New England Blues clubs.

Although she was also involved in her own part-time band, (Diana Shonk and The Rogues Country/Blues) she knew that for her this wasn’t a full time career. “That’s why I have so much respect for these musicians, I know how much work it takes to be able to put together a night of live music for an audience,” she said.

After attending Keene State in 1973, she moved to New Orleans “because I wanted to get away from my bad (musician) boyfriend and if I was going to go, I wanted to go to a place that had the great live music. I debated moving to Chicago or New Orleans… and N.O. won.”  “I had the greatest time there. I heard all sorts of great musicians there. I met Ellis Marsalis and his family of talented children, Branford, Wynton and Delfeao. I enjoyed Jazz, as much, if not more at the time and I found great shows in New Orleans.”

After a year in N.O. she decided to enroll at the Massachusetts College of Art in Boston and become a graphic designer. “I really needed to go home and start working on a life” she said.

As expected, graphic design was the main focus, and she thrived in that environment for a few years. But was there a way to combine music and graphic design? For her senior thesis Diana proposed to do a newsletter that featured information about the Blues scene and the schedules of the bands in New England. “I wanted to make it fun and available for people who wanted to hear live music,” she said. But her academic advisors at Mass. College of Art declared that her idea was not altruistic enough. “That turned out to be incorrect, I can attest to that after 25 years of volunteer labor, that is was ‘altruistic enough.’ ” she said. Although the concept was nixed in the classroom,  Diana kept the idea alive in the back of her mind, an idea to be pursued at a later time.

Before she had a chance to graduate, she was offered a job as an art director at Wayne Green Publishing in  Peterborough, NH. “I couldn’t believe it – that was all I ever wanted to be – an art director!” A few years into the job, reality set in. “I was designing the covers for three magazines and all the in-house advertising at Wayne Green for $5.25 an hour. It was such an insult. I figured I could do better as a freelancer. Soon I opened up my business in Peterborough above the local radio station.  One day my friend, Jake Commander, who was a British computer code writer genius (and had worked with the Electric Light Orchestra), brought in what looked like a tiny little box. It was a Macintosh computer. He said, ‘Diana, you are not going to believe what this does. You are going to love it.’”

“I tried it out, and he was right and I was blown away! At the time I was using a type setter and a stat camera and a lot of other specialized equipment to do graphic design. So once I had the Mac – a tool that could draw perfectly square boxes without using an exacto knife to straighten the ends – that was it.” And she was off with her own Across The Board Graphic Design business using a Mac. That was 1982.

One of her initial clients was the Peterborough Chamber of Commerce. They used little boxed ads for their members. She would soon adopt that same design that has held until today. But, like everything else that was printed in the late-1980s and early-1990s, printed material was produced with galleys of type that were placed on pages, run through a wax machine, laid out on boards, and hand-delivered to a printer. The printed newsletter was handed back to the publisher who then had to hand-print all of the addresses and take them to the post office to be mailed. There were no collated mailing lists or labels back then. Everything was done by many hand – folding, stuffing, weighing.

Diana said, “It was a hard time for a band to promote itself back then. Getting their postcards printed, keeping a mailing list and writing the addresses by hand, it was a lot of work for them. So I proposed that I would do it for them and send the listings to more people on the combined lists.”

Diana approached her brother Peter (Loaded Dice) with an idea: “I’ll do the publicity for ALL of the bands in one publication and I’ll mail it to the bands’ different mailing lists.” Strength in numbers was the concept. The first edition, which was called Audience, came out in Oct. 1991: 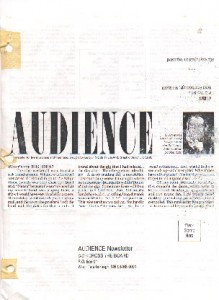 It had schedules for Loaded Dice, The Movers, the Rynborn Blues Club, Boston Baked Blues, Bobby Watson Blues Band, Roomful of Blues, Penuche’s Bar in Keene, Art Steele, ads from the Valley Green, Retro Music, Cheshire Music, the Peterborough Savings Bank, Thomassina’s Restaurant, which was in Milford, NH and Jake Copley’s. Lots of clubs were presenting Blues, it was very popular.  During this start-up period, for the newsletter, Diana decided not to play in her band any longer because there wasn’t enough time for both, after watching her friends fold the newsletter during her Country Jam at the Rynborn.

She hired Suzie Gordon as a production assistant and publicist to get the newsletter up and running and to create interest in the new publication. She was a tremendous help because she knew so many musicians and club owners. She helped build up the schedule page in the newsletter. With her help on subsequent editions– which came out monthly– more and more clubs advertised: Ed Burke’s, Harpers Ferry, Stormy Monday Café, Jonathan Swifts, Union Station and the Plantation Club in Worcester, and bands like the Motivators, Chuck Morris & Sidewalk Blues, Lowdown Towne and The Hipshakers, Cat in the Hat, Loaded Dice, Lynn Harrison and others followed. And the Blues scene was rocking from all corners of New England.

In the early years, the newsletter was mailed to about 3,000 people. And it just continued to grow and grow. And as it progressed, there were more features and profiles of bands and individuals both national stars and local favorites. Festivals were becoming popular. There were updates, some record reviews and personal observations from several writers, including TJ Wheeler, a musician, educator and Blues historian who always made you think deeply about the state of the Blues and where we are today as a society.

One group that remained in the listing section for the entire 25 years is Roomful of Blues. Although the band went through its own metamorphosis with many changes in personnel during that time, “They stayed with me,” Diana said. “And they have been great to work with. They really gave me the credibility of their great band. I showed their schedule to thousands of people over the years.”

The concept of the newsletter was to get all the information into one reliable and central place where the most people would be able to plan their entertainment. 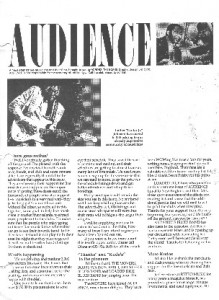 While at the 1992 Portsmouth Blues Festival, Rockin’ Jake, a local musician who often accompanied TJ Wheeler, suggested to Diana that the name of her publication should be the Blues Audience instead of Audience since it’s all about Blues. So the October 1992 issue featured the first black and blue banner as The Blues Audience.

As the newsletter grew, so did its reach to the musicians with features on Little Boy Blue (Richard Malcolm), Undaunted Professor Harp, Gary & the Moodswingers, the original House of Blues in Cambridge, Harpers Ferry, Little Annie Raines, Parker Wheeler and the Grog in Newburyport, MA, Midway Café of Jamaica Plain, Kat in the Hat, Monster Mike Welch, James Montgomery, Jacksonville Blues Band, Sticky Mike’s Blues Bar of Boston, Guido Murphy’s, Johnny Ds in Somerville, and many clubs were also featured including The Rynborn of Antrim, NH, Smokin’ Joes in Brighton, MA and Chans in Woonsocket, RI and so many others, as well as retrospectives from the Speakeasy in Cambridge (where Diana was actually a waitress for in the late 1970s and got her inspiration for the newsletter about Blues), and so many more clubs and bands.

To reach out even further, Diana came up with the Blues Audience parties, hosted in conjunction with the bands and the club owners.  “Those (parties) helped a lot with subscriptions and getting the word out about the newsletter,” Diana said. “People would be so happy to win something. If you bought a raffle ticket you’d have a VERY good chance that you’d win a CD or a T-shirt. It was fun. (And if someone was disappointed, I would slip them a CD)…”

Blues on the radio seemed like a good idea!

Diana started her Blues DJ career around 1984-85. “I had a show on (WMDK) in Milford, NH for less than a year, which was a volunteer position. Then I started in Keene at the radio station (WKNH) there in 1993-94 … and then there was (WRSI). The Greenfield, MA radio station called and asked me to do a Blues show down there, and of course I said, yes. I did the show in Greenfield every weekend for five years.”