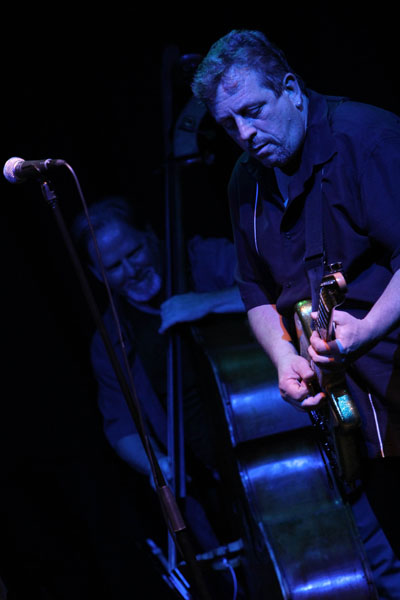 Profile and photos by Diana Shonk

Award winning Roomful of Blues has a wonderful new record. It is a cooperative effort from the band, deciding on the tunes and executing them the way only these
veteran musicians can. Chris Vachon is the lead guitarist and leader of the band. He has lived through good and bad times (economically) with the band. But he perseveres, forges ahead and believes in better time coming.
Chris has been a musician all his life and has no plans to change that. I think he has been very under rated as a guitar player. I was especially struck by his talent on Roomful’s new record, HOOK, LINE AND SINKER, on Alligator Records He has been a staple with the band for twenty one years! But that is only part of his total picture,  he plays guitar, sings, writes music, produces and mixes Roomful’s records.
Now in his fifties, Chris has traveled with the band all over the US, Canada and internationally to Europe for the past 21 years. He has lived in Rhode Island almost all his life. He’s a self-effacing, down to earth genuine kind of guy. He heats with wood, cuts it himself, has a couple of dogs, Rufus and Valentine, and generally lives a quiet life when he is not on the road with this exciting 8 piece little Big Blues Band.
Chris began his love affair with the Blues early in his life. “We had a little cover band when I was sixteen or seventeen and we would play at the beach. My friend Arthur Harris gave me LIVE AT THE REGAL by BB King. That was the defining moment. Over the years I have listened to tons of music and that is kind of how you pick things up. I have learned a lot of different stuff with Roomful over years. There are lots of different styles and we try to cover a broad spectrum of tunes, so it is not always a shuffle or a march, to keep it interesting for the people and for us.”
“Way back, I went to Florida for a couple of years with a band called Sybilla & The Slim Buckle Band, it was an original singer/songwriter band. I moved from there to New York City. I was eighteen and thought I’d play in the city, but I couldn’t find enough work so I was soon back in Rhode Island working four nights a week. We had this ‘band house’ concept… four or five of us would rent a house and we got thrown out of a few houses in our time. Back then we actually had money ‘cause we were working all the time.”
“Then I played with B Willie Smith. We’d do ‘Route 66’ and everybody (in the band) would do high kicks. B Willie would do really HIGH kicks, he was a black belt in karate. We played a little bit of Swing, Blues like Huey Piano Smith ‘Don’t You Just Know It’ and tunes mostly Blues based.  After that I played with Eight To The Bar for a year just before I got into Roomful.  At that time, there were lots of guitar players trying out to replace Ronnie Earl. Roomful had hired a guy named Tommy K who was with the band for a couple of years, but he fell in a club and was injured. I think he was trying to save his guitar when he fell and he broke his arm really badly, it needed pins and was very painful for him to play, so they invited me to come on a tour to California. They gave me a day and a half to learn all the songs. I played on that tour and when we came back, Tommy K went back with Roomful but then that didn’t work out, so they hired me. I remember it was right around the time Stevie Ray Vaughan died in October 1990. I remember that because the first gig I did in Rhode Island was to raise money as a donation in Stevie’s memory. 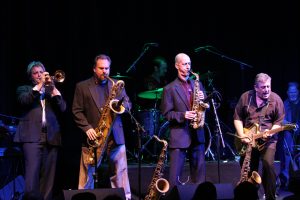 Seven years later Chris found himself in a new roll. “I took over as bandleader around the latter part 1997. We had a big turnover of personnel and we had a new record to do. Bandleader/Producer etc. sort of just fell in my lap. It was a tough time regrouping but, it all turned out well and we’re still here 6 records later with what I feel to be one of the finest lineups since I joined in 1990.”
How they made the new record.
“In general the band gets together and we listen to potential material whether it be originals or covers. “We all brought ideas to a meeting. On HOOK, LINE & SINKER we decided to record a bunch of cover tunes from artists we really admire. We collected eighty tunes between all of us and we had a listening party at my house. After that we all went back and forth on email voting for what we liked the best. We went around several times before we had settled on the 12 tunes we recorded.” 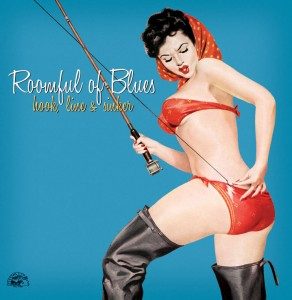 “We then rehearse for a few days and make sure we know everything about the tune and how we will play it. That’s probably the most important part of the process. If you have that under your belt you can go in the studio and get right down to business. On the last few CDs the basic tracks were all cut within 2 days. We really don’t do much overdubbing at all. If someone flubs something (including me) we generally fix it on the spot. The main thing is to keep the work flowing and keep people excited about what they are doing. We recorded the twelve and cut the basics in a day and a half. Then I take the tracks to my home studio to mix it. It was relatively easy to record but it took me two weeks to mix it.”
Chris’ home recording studio
My studio is powered by a Mac pro. I use Pro Tools 9. I have a large collection of software Plug-ins I use for different mixing tasks. I also have a lot of outboard gear such as pre amps, compressors and some great microphones. I mostly mix here but, do have the ability to overdub vocals, single instruments, etc. I mix records for local bands and that is something I am trying to develop. I specialize in Roots music, because I feel my experience could really help someone who is producing an early Rock ‘n’ Roll or Swing CD. I take their tracks and I make a mix of what I think it should be like, they also tell me what they want. “I equalize the tracks add reverb and delay to make it big and luscious.” (laughs)

Chris’ record producer duties
“I’ve always been interested in recording.  When I was a kid I used to use two reel to reel tape recorders, record one, play it back, play live with it and record that and you would have three parts on the second recording. This was before consumer multitrack machines were available. We were doing it on the equipment you would borrow from the Audio Visual Department at school. So it was pretty natural for my interests to evolve in to production and mixing. I’ve been in the studio for countless hours and I’ve always paid attention to what the engineer was doing, especially during the mixing phase. I credit my mixing knowledge to learning from Phil Greene who is an ace at the board. He had a studio in Warren, RI called Normandy Studio. I learned quite a lot watching him… how to get certain sounds and how to create space with effects and such. I also spent a lot of mixing time with Ian Schreier down at Osceola Records in Raleigh, NC. We did the first two Alligator records together. Ian is also a great mixing engineer, he is very efficient, and has ‘great ears.’”
Those special guitars, instruments and amps
“The guitars I use are made in Finland. They are called Flying Finn Guitars and they are handmade by Matti Nevalainen. My relationship with Flying Finn guitars started about 12 years ago when a guitar rep named Steve Farkas came to a gig in Cleveland and asked me to try one. I really liked it and played it all night. Since then I’ve been fortunate to have 6 or 7 of them given to me. My favorite is the Gold flecked anniversary model. It’s called the Golden Rose. It has hand wound pickups with a nice fat tone. The neck remains stable no matter where we are in the world. You can’t say that about too many guitars. I must have gotten just the perfect combination of wood and pick-ups. That’s the one I’ve used on the last 4 CDs and really the nicest guitar I’ve ever owned… and that’s a lot of guitars!”
“I use a 100 watt Rivera amp head. It’s called a Knucklehead. I also built my 1/12” cab that has a 300 watt Carvin bass speaker. It has basically lived in the baggage compartment under the bus for the last 15 years. I love it because it’s extremely reliable and sounds great on inside and outside gigs. The EQ’s voicing are perfect for the sound I like. I use an Alesis quadraverb which I built into the cab for reverb and delay. I also use it for a Leslie effect for some tunes.”
Where do you get your ideas for solos?
“A lot of it kind of like it takes care of itself. Bob Enos once told me about soloing ‘Bubba, I just close my eyes and I put my fingers on those valves and hope it comes out good.’ Soloing is kind of like following a road map, you kind of know where you are going to start and where you want it to end.” Changing the focus to the band, Chris noted that  “Rich Lataille is a natural soloist, I have never heard him play anything bad. If he didn’t really like his solo the first time, he will want to go over it and do another. We will all scratch our heads and wonder why he’d want to go over something that was great to begin with. We have 5 soloists I try to even things out and feature everyone as best I can. Obviously there will always be solos that just naturally belong to a certain instrument.”
Putting together the big horn parts
Rich Lataille notates all the horn parts. “We have an archive book to notate the horn arrangements to each song. In general, all the horn players are involved in arranging their parts. If it’s an original we’re working on, the songwriter will throw in their ideas as well.” Chris explained. 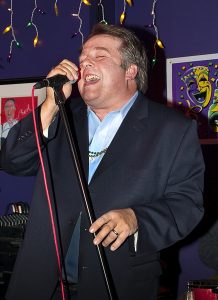 What do you think of your new singer for these classic Blues songs?
“Phil is truly an accomplished, versatile singer There wasn’t anything we threw at him that he didn’t nail and execute perfectly. He’s also a great guy and it’s a pleasure to have him in the band. His enthusiasm for the music and the band is genuine and a very positive asset for us all. I really think this new record is going to be very popular.”

And popular it is! They sold 1,200 CDs in the first two weeks after the release in January 2011! Get it, it is true BLUE Roomful!