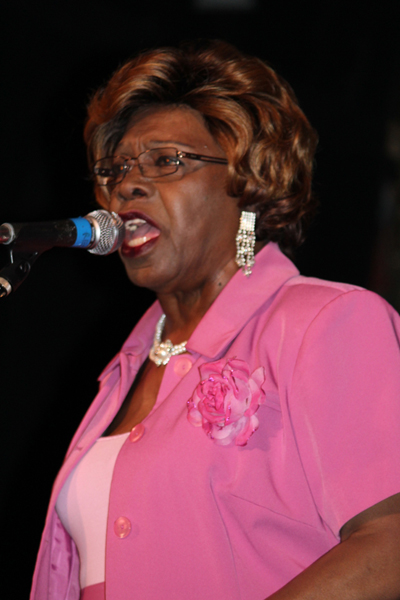 Toni Lynn Washington:  One of the best in the music world!
Local vocalist swings, scolds and exudes Soul ‘with a capital S’

With apologies to Tower of Power, the group that performs “Soul with a Capital S,” this is the essence of Toni Lynn Washington. For the better part of seven decades, she has performed with Baptist church Gospel groups, Big bands, Doo-wop, 1950s Pop, Rock, Soul, Jazz, and Rhythm & Blues – anything and everything. She admits she always wanted to be an entertainer and vocalist, able to own the spotlight and sing to individuals in a collective audience but she thrives on making that one-to-one connection with everyone who sees her perform.

Toni Lynn Washington grew up in Southern Pines, N.C. in the late 1930s and early 1940s in a totally segregated section of town, which was the norm at the time. “It was a small town yet I had a really good childhood. All of our neighbors were very close, and we looked out for each other.”
“We (myself and my two brothers) lived with my grandparents because my mom and dad were travelling, doing hotel work on the road. I also had a sister as well, but she lived with my paternal grandparents,” she said. “So we were basically brought up by my maternal grandparents, George and
Lena Leak.
“I went to grade school in the same building that housed the local high school … and attended the local Baptist Church there. As a young kid, I did sing in the youth choir at church, and I’d also sing the latest songs on the radio from Frank Sinatra, Ella Fitzgerald, Big Mama Thornton, Nate King Cole, Joe Williams, Ruth Brown, Laverne Baker, Dinah Washington, and so many others of the Big Band Era and the R&B stations
I could get when I would do my chores around the house,” she said.
It was OK to sing and dance on the weekdays, but Sunday was reserved front and center for the Lord. She attended church services in the morning and went to Sunday school in the afternoon.
Basically that was my life in Southern Pines as a young girl. When I was about 13, my parents permanently relocated to Boston; and they came back to Southern Pines to get us after they were settled in the South End of Boston. My stepfather got a job at the Domino Sugar Company and my mother got a job at the Sheraton Hotel on Dalton Street. And she worked there for many, many years.
Toni attended high school in Boston … and after high school, she met her husband who was in the Navy. They married in Boston right before he was shipped out on assignment, bringing her two children, Gary and Cheryl, into the marriage. “I had two other children afterward, and they all live in the Greater Boston area now,” she said.
Those first few years of moving around from one base to another, and her children still tethered to Boston and in the care of her of their grandparents, were difficult at times. So she sought refuge in the local nightclubs and sat in with as many people as she could, earning a few dollars here and there. Week by week, Toni Lynn was being recognized as a vocal talent who could hold her own with the best in the South.
Asked if she thought she always knew she had special vocal qualities at a young age, she said, “Yes, I think I did, even when I was in Southern Pines. I have a huge repertoire of songs and what I like to do, when I’m performing, is to go back in time and pick some of those songs and put a new treatment to them and bring them to this era with a different interpretation.”
New Orleans, Pensacola, Florida, Norfolk, Virginia., were all treasure troves for Toni Lynn’s musical resumé as she gained fame, but not so much fortune … until … “Dear Diary,” a song written by Toni Lynn and published by Kon-Ti  records of New Orleans about a girl who fell for her best friend’s man (sort of a reverse “Layla” by Clapton). The B-side was called “Breaking Lovers Hearts,” which reinforced the theme. 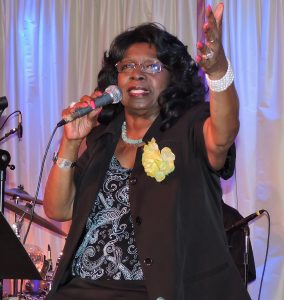 2016 performance with Anthony Geraci and Sugar Ray & The Bluetones photo by Diana Shonk
But it was the acceptance of everyday music fans of “Dear Diary,” as well as respected New Orleans pianist, Edward Frank, who introduced her to others in the recording business, that placed Toni Lynn on the national stage.
Soon thereafter, she was asked to go on tour with Sam and Dave and other R&B artists, which eventually led to more work and more opportunities, such as a group called Sound 70 based out of Los Angeles, which initially started out as another trek with her Naval-bound
husband.
Toni Lynn continued to grow as a singer and immersed herself into her passion for performing. In the early 1970s, she was chosen to perform for the troops in Vietnam and other Southeast Asia countries with the famous Bob Hope Presents showcases.
After the fall of Saigon and the end of the war in 1975, she joined a female quartet of former backup singers for Ray Charles which performed on the West Coast and in Las Vegas…but it didn’t last.
Weary of the roads and far-away    destinations, she made her way back to
Boston and to her family, this time minus her husband. Life was now not as glamorous and money did not come as easily. But she did continue make those all-important musical connections.
There was a private club in Boston – The Bay Tower Room – “and I had a gig there working regularly in the 1980s. I really enjoyed working there,” Toni Lynn said. “It was up scale and fancy and really, really nice, and I really liked performing there.
“One night they hired a sax player, and he told me there was a group called Boston Baked Blues that was looking for a lead singer because their singer was going to leave. So I went to a club called City Side, they were playing there, and I auditioned for them.  And Vinny Serino, the leader, liked what he heard and I was hired. I was with them for a little while … and Bruce Bears was in that band as the keyboardist.  “After a while, Bruce told me that he would like to spin off from Boston Baked Blues and form the Toni Lynn Washington Band. And that’s what we did, and our first gig was at Scullers in Brighton,” she said.
“Bruce spent a lot of time and effort in developing the band and keeping us working for many, many years – that was our livelihood. We were on the road constantly … and we were fortunate enough to make some CDs for Tone-Cool Records,” she said. (See discography.)
“But then 9/11 intervened and stopped what we were doing . We were on the road at the time and everything was either closed or, for those that were still open, no one showed up. So Bruce thought it best that we didn’t tour any longer.”
That affected the other members who now had to find other jobs because they had families, so everyone started to do contract work with other bands. Bruce eventually joined Duke Robillard’s band.
While there have been many changes during past 25-plus years in the New England music scene, it hasn’t affected Toni Lynn as much as it has others. “It’s all been good for me because I’ve had good connections in working with Bruce, so for me, there hasn’t been too much change.
“Today, most of my gigs are by invitation, which is good for me because I get to step out of the ‘Blues box’ and do some other stuff. That’s turned out pretty good and I have got a chance to do some tours. In May, I toured for two weeks in Stockholm, Sweden. And on July 24 (2016), I’ll be leaving for a tour of Italy with Gordon Beadle. I’ve got some other festivals later on this summer with Anthony Geraci, keyboardist for Sugar Ray and the Bluetones … I sang on one of his tunes on his Fifty Shades of Blues CD, so he sometimes takes me out with him when he is promoting that album,” Toni Lynn said.
“I don’t consider myself a big star, but I do get a lot of work. And I don’t have any intentions to retire. I may not be as spunky as I used to be or jump around on stage like I used to, but people accept me very well and they enjoy what I do. Musicians enjoy working with me and I enjoy working with them because we have some of the best musicians right here in New England. And I’ve known that for a long, long time. “I’d have to say that’s worked out pretty good.” 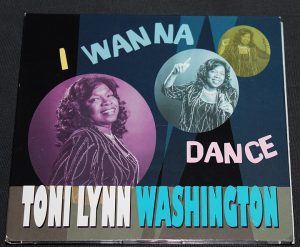 photo by Art Simas
Last year, she released her latest album, I Wanna Dance.  “It’s doing very well … Diane Blue put it out on her label, Regina Royale Records, and it’s been getting a lot of attention,” Toni Lynn said. In fact, she was nominated for Soul Blues Female Artist of the Year this past May at the 37th Blues Foundation’s Blues Music Awards in Memphis. And this wasn’t the first time. Beginning in 1996 through 2005, Toni Lynn was nominated for Soul Blues Female Artist of the Year (2005, 2004, 2003, 2002, 2001, 1996) and Contemporary Blues – Female Artist of the Year (1998, 1997).
Over the years, Toni Lynn worked with many club owners, including the late Teo Leyasmeyer, the former talent buyer manager of the original House of Blues in Cambridge, who introduced her to the Boston Blues Cruise in the 1990s. “And I still do that gig every year,” she said. “He also booked me in quite a few venues and we even went on a tour in the country of Latvia with several other Blues players.” 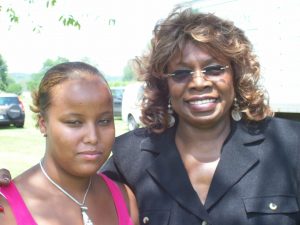 As far as the immediate future, “I want to continue working and singing … It’s what I do, it’s my livelihood. I’d like to record more because I have many good friends, such as Bill Smith of WRKO radio who ran his studio, Club 39 in Sudbury, MA (www.club39.com).  He’s a big supporter of local musicians and he works with us very closely. And my
I Wanna Dance CD was recorded in his studio.”
Although she is not classically trained nor does she read or write music, “I just tell the people who I play with what I want. They know my style and what I want to get out of my music.”