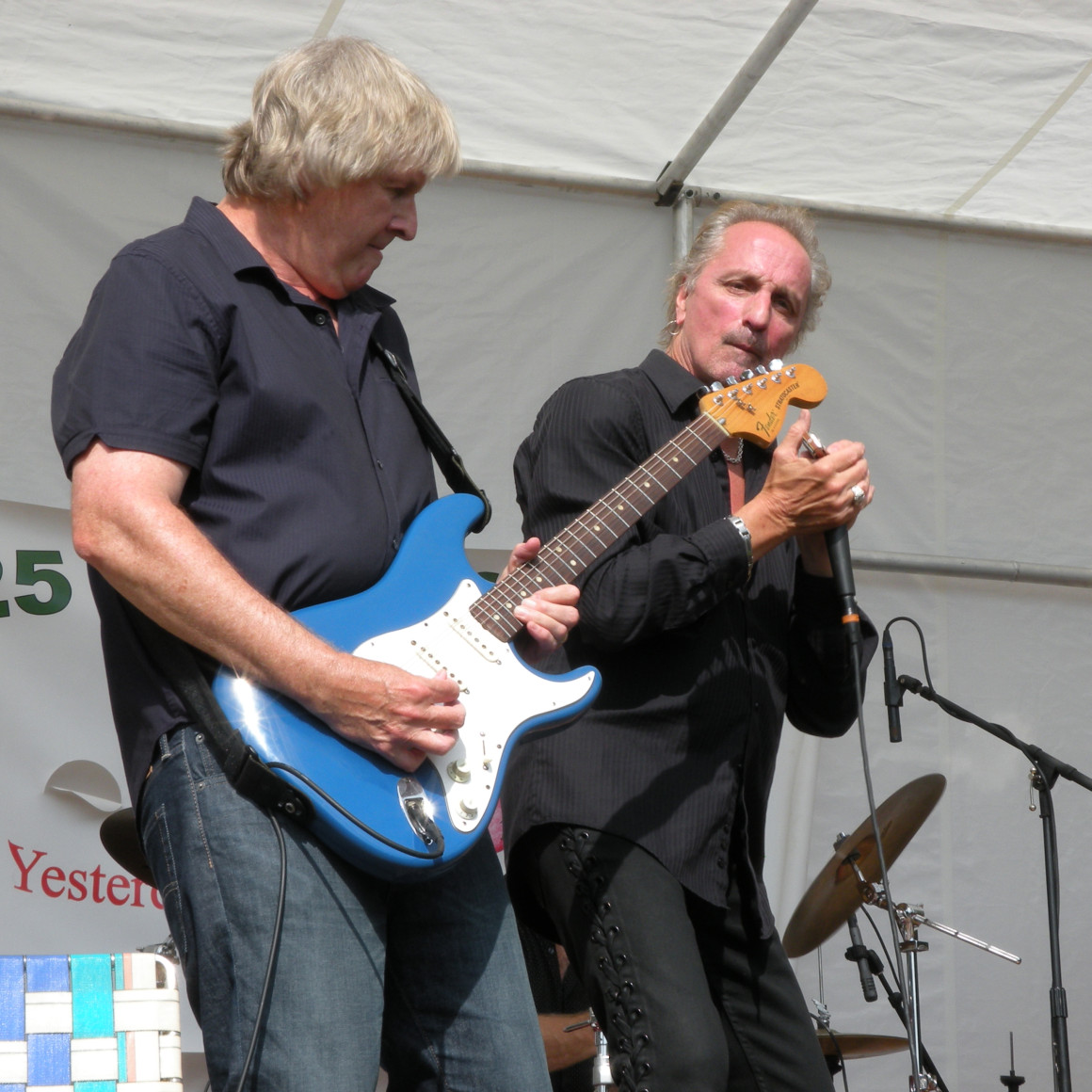 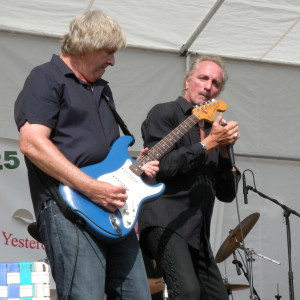 For George McCann, learning to play guitar looked like it was going to be an insurmountable challenge, for a 17-year old in Framingham, Massachusetts in the early 1970s. There were going to be years of taking lessons, endless months of practice that would cut into his “real” life of hanging out with friends with “wheels.” Plus, it was going to be a drain on his wallet.
“That was my thinking,” McCann said during a recent interview at a local restaurant devoid of diners.
Like most teens at the time, he saw many major concerts and local bands in the Boston-Metrowest area. He was always blown away by the guitarists. It just so happened that one of his friends had a ukulele and McCann started noodling with it to get a feel for the strings and how they reacted to the body of the instrument. Another friend had a guitar. “When I’d visit him, I’d pick that up, too, and start fooling around.”
After a while, he realized he could replicate notes and he knew what came after. He got better and it wasn’t too long before he bought his first guitar. “I started doing that for fun and then my friends saw me a few months later and asked, ‘How are you doing that’? And I thought, ‘I think I have an idea of how to do it and I might even have some musical talent.” he said.
As the months went by, listening to Cream, Hendrix and Mike Bloomfield, guitarist with the Paul Butterfield Blues Band, “I just couldn’t put it down. I practiced and learned because I loved it, it opened a huge door for me.”
It was Bloomfield who led him to BB King and Muddy Waters and the first generation of electric Blues. From there, McCann said he began to understand the origins of the music he liked so much, such as the Rolling Stones, Led Zeppelin and Cream. “And I entered a period where I just wanted to listen to Chess Records and know everything about the artists and the music.”
Now more than 40 years later, McCann has played with a variety of Boston area bands, when he was a teen he was with the Lean Street Sliders performed in former Boston bars such as Bunratty’s, the Speakeasy and the Cricket Lounge. “We’d go to a place and when the band would take a break, we’d get up and play.” Later he worked with The Blue Hornets and for the past 10 years, with the James Montgomery Band, as well as his own band.
He’s also been a dependable freelance guitar slinger for many regional bands: the Joeys and Wilbur & the Dukes who were mainly based out of Worcester; the late KD Bell; Brian Templeton and DD and the Road Kings, to name a few.
“I was like a hired gun, which was great and I liked it.”
Fifteen to twenty years ago, the business of Blues was going strong. McCann said “there were a lot of opportunity for musicians. One could find steady work within a one to two-hour drive north or south – from Manchester, NH., to Maine, to southern Rhode Island. Plus there were private function opportunities and college gigs when he was with the Blue Hornets.”
“I think Stevie Ray Vaughn, Robert Cray, the Fabulous T-Birds and the subsequent Rock music explosion of the Blues in the late 1980s to early ‘90s really opened the door to a lot of Blues bands,” he noted.
The House of Blues in Cambridge was going well and there were also many places that supported young musicians giving them the opportunity to play, practice, and learn. So I was doing all right,” he added. “To keep Blues or any music alive and thriving in any time frame, McCann said musicians will always need support in any business atmosphere or decade. Musicians also need the recognition to keep going with their music.”
In the late 1990s and early 2000s, McCann found he was freelancing with fewer bands and the gigs were more infrequent. “I was doing OK, but I did see things slow down a bit. But I still liked the variety.” During this time, one of his freelancing gigs was with the James Montgomery Band, which led to a full-time stint in 2004. David Hull was the bassist, Marty Richards, followed by Seth Pappas played drums. Now Jeff Thompson is the drummer, with David Hull and George, with Montgomery out in front. “I think I cook with those musicians really well and we have a really great sound.” 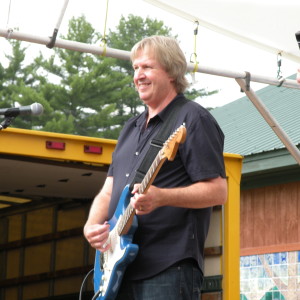 James Montgomery says this about George: “I first saw George with the Blue Hornets and from the moment I saw him I realized he was something special. I tried for a few years to get him to join my band and when he finally did I was really glad to have him on board.
“I think he is the “best in the business” – that is – he is on the same level as all the best guitarists from B.B. King to Joe Bonamassa and Derek Trucks. He adds soulfulness that stems from his passion for the music and his unparalleled virtuosity. As a rhythm player or ensemble player he is also on top of that list, and being able to play as a band member and not just a great soloist is something all guitarists must be able to do if they want to be called “great.” I’m fortunate to have him as a band member and he is well liked by EVERYONE!”
McCann added that the band has had some great experiences, such as opening for Aerosmith at Tweeter Center (now Xfinity Center) in 2007, a gig in Portugal, going to Clarksdale, Mississippi to play at Morgan Freeman’s Ground Zero Blues club a few years ago, and playing alongside James Cotton, Skunk Baxter, Joey Kramer as well as being part of some great shows at the House of Blues.
“For me, it has definitely been a great experience. We work really hard but (as musicians) we have a great time doing what we do. The music is always our reward… and communicating with an audience.” McCann said, “When you get something going and they (the audience) really erupt – if you hear that a few times early in your career you realize that you’re onto something, and it’s just not the musical content. It’s the emotional connection with the audience. They recognize a feeling in you that is common in them. They’re feeling the same thing you are, and they understand it. It’s a language that has to do with everyday life – love, romance, angst, frustration, joy, the palate of human emotion.
To keep Blues, or any music alive, McCann said musicians always need support in good times or bad.
“As a musician, you have to develop a way to keep going because music is a very tough business. I hear students say, ‘I love music and I want to be a musician.’ I’ll tell them, ‘You had better love it because it is not easy … You have to keep what it is that you love about doing it. You can’t let anyone take that away from you. As soon as they do, you stop enjoying what you’re doing. That’s when you quit.’
“I always felt that I was going to be a musician for life. If you find an audience and find people who support what you’re doing … that’s your life blood … that’s solid gold … you can’t put it in a bottle, but that will inspire you for the rest of your life!” 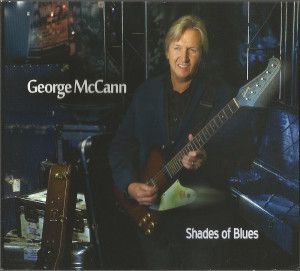 'George McCann interview by Art Simas' has no comments