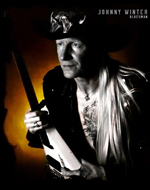 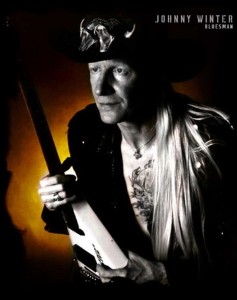 A thin, albino, elder statesman of the Blues was aided up a small flight of steps to the stage. He sat down on a chair where he would remain for the rest of the night. Barely looking like he couldn’t do much at all. He took a slide out of his pocket as a guitar was presented to him. It was my first time seeing Johnny, and I admit things didn’t look too promising. As soon as the fingers, pick, and metal touched the strings the place erupted.
That was seven years ago.

On a cold day this February, Johnny Winter takes the stage at The Bull Run Restaurant in Shirley, MA to a sold out audience for his 70th birthday celebration. The band wastes no time launching into Winter’s cover of ‘Johnny B. Goode.’ Master guitarist Paul Nelson, bassist Scott Spray, and drummer Tommy Curiale are solid and don’t miss even the most subtle cue from the legend as they keep the crowd mesmerized. It was just like last time, only this time I knew what was coming.

When some of our older bluesmen travel- the elder talks to the audience about hard times, life on the plantations, etc. while the band plays background chords. Yes, it made the night’s performance shorter, but Winter let the guitar do all the talking as they played “Got My Mojo Working,” “Killing Floor”and “Summertime Blues.”

Johnny uses one guitar for most of the night; a custom Western style the shape of a Les Paul that you’d expect to be used by a “guitar slinger.” The weird looking Erlewine guitar doesn’t make an appearance, but the legendary Firebird that Johnny is most famously associated with shows up at the end of the set for an incendiary version of “Highway 61 Revisited.”

After the show, Johnny and the band more than make up for the short set by inviting anyone who wants to shake hands, take a picture, or get an autograph onto their motor coach, outside the venue. Johnny and the band are extremely gracious and make sure every person gets their turn. I highly recommend seeing this living legend next time you have the chance, especially if you haven’t yet.

'Johnny Winter' has no comments