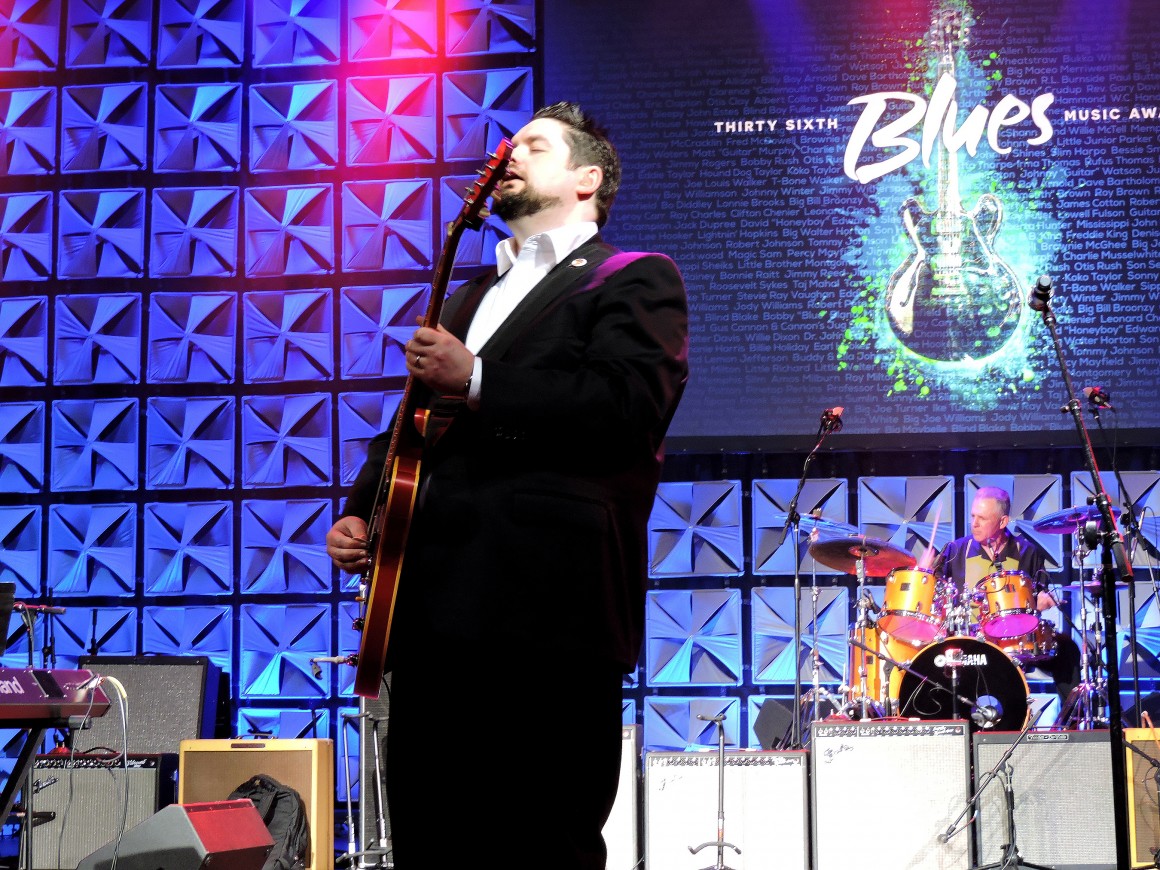 Many of us recall seeing Mike Welch literally grow up on stage in the early 1990s. He seemed mature beyond his years, digging into gut-wrenching blues with such poise, character and conviction.

A great deal of that early maturity was due to his family. “My parents were possibly the best parents I could have lucked into having,” said Welch, who is now 35. “They were always very honest and incredibly supportive.”
But there was a very real unwritten contract between the performer/son and his parents. “As long as I didn’t drink, do drugs and made it through school with test scores high enough to get into any college I wanted, and I didn’t become a self-important pompous jerk, they would support me,” Welch said. “If I screwed up on any one of those things, they would have pulled the plug.”
Well, he did make it and made the most of his early celebrity without being an early concoction of Justin Bieber. Mike was a gentleman in his teens and remains so today.
In the early years he had a little help from musical friends, such as George Lewis, his songwriting partner and second guitarist in the initial Monster Mike Welch Band. “He taught me what it meant to be a professional, and what’s expected of a musician above and beyond knowing your instrument.  And I learned a lot from him over the years,” Welch said.
Older “veterans” of the Boston blues scene, such as Tim Gearan and Matt Woodburn, who ran the Johnny D’s blues jam on Sundays, looked after him and pointed out the subtleties of musicianship when it came to nuanced tone, buildup and breakdown within the interior of the blues genre.
“Matt was very much a role model for me,” Welch said. “He was the first local guy I saw on stage. He had a lot of power and he was very gentle. I think I was 11. But everyone in that circle wanted to help me, and I am eternally grateful for that.”
Comprehending the blues as a 10- or 11-year-old, Welch said his first impressions were solely based upon the emotional ingredient that initially lured him to the music. ”In reality, it’s more complicated than that. But that was the thing that got me,” he said. “I first recognized it in John Lennon’s voice, and whatever that was, I wanted more of it. Looking back, I think at that age kids definitely see things from an oversized point of view, and I saw music as more operatic and dramatic than it actually was.”
Ronnie Earl was another huge early influence on him, Welch said. “His playing has that incredible emotional intensity to it. There is a lot of drama in his playing … and at the time, that’s what I wanted to do.”
Today, Welch said he does not play in that style as much as he used to. But if you listen closely, one will still find Ronnie Earl’s signature on Mike’s strings more than two decades later.
And then there is the lineage of vocalist and harp master,     Sugar Ray Norcia, and the Bluetones, comprising Michael “Mudcat” Ward (bass), Neil Gouvin (drums), and Anthony Geraci (keyboards) which first started in the late 1970s playing alongside J.B. Hutto, James Cotton and many others original masters in Providence-based bars and the Speakeasy in Cambridge.
Initially, Ronnie Earl was lead guitarist for the Bluetones before he split to form his own Ronnie Earl and the Broadcasters in 1988, which still dominates the New England instrumental blues genre.
Kid Bangham replaced Earl as lead guitarist soon after and the Bluetones went back to business.
Meanwhile, Welch pursued his college years, first at UCal-Berkley and then locally at the Berklee College of Music in Boston. The Bluetones were on hiatus for the better part of a decade while Sugar Ray fronted Roomful of Blues (1991-1998). The eventual reunification of the Bluetones in late 1998, featured Troy Gonyea and Rob Nelson on guitars, with Neil and Mudcat.
“Mudcat and I have always had a true musical connection. We tend to listen to music for the same reasons … to get the same thing out of it, although our tastes are different. He and I are still looking for whatever that emotional ingredient is.”
In 2001, the lead guitarist spot was open and Welch got the nod. That’s when Welch received his advanced degrees in musicianship.
“My first time in the band I was probably less comfortable and was more intimidated by the legacy of Ronnie Earl with Kid Bangham because I hadn’t really claimed my place in the band. At that time, we did mostly songs that other guitarists had played. But I think I fit in pretty quickly because I was so aware of what they do … finishing each other’s sentences musically and playing reactively and because I knew Sugar’s voice. And because I had the experience of playing with others in my band, I think it was an easier fit for me. Plus I loved it so much.”
After a year or so, Welch wanted to break out of the blues corner and experiment with a trio that had a rock edge, and to write his own music. After that experiment Welch started to ease himself back toward blues. 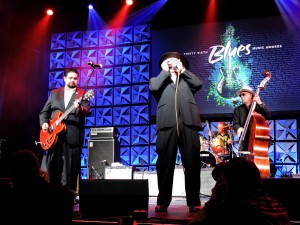 Mike on stage at The 2015 Blues Award show in Memphis with Sugar Ray & The Bluetones Mike said that “Sugar decided to go DEEP for our set” (and it was, in my opinion the outstanding set of the night). -photo by Diana Shonk

“Sugar had called me to play on his My Life, My Friends, My Music album which was half a big band swing record and half a blues record,” Welch recalled. “Duke Robillard played the swing stuff because there is no one who does jump blues better than Duke, although he could have done the entire record.
“I did the stripped down blues sides and before I knew it, I was playing with them at their gigs again.”
After about six or seven, it finally struck him – he was back with the Bluetones. And he’s been there ever since – the newest member of the family, now in his 23rd year, while the band itself has been around since the late 1970s.
Welch went on to explain the inner workings of the Bluetone family. “Like all families, we are very diversified in who we are. And we have shifting dynamics all the time. For instance, in creating songs, Sugar is definitely the main songwriter, and on each record Mudcat usually has a couple of songs; Anthony has a bunch of songs on our latest record; and I’ve had one song on the last couple
of records.
“When I came back to the group, I had five songs on that first record, and I got so excited about because I thought, ‘Now I can write songs and I can hear Sugar sing.’ So all of these ideas are swirling around. 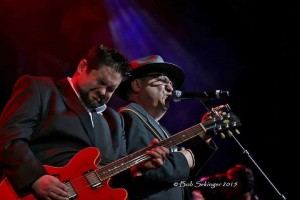 May 2015 the Bluetones performed at the 2015 Blues Music Awards in Memphis, TN – photo by Bob Sekinger

“Mudcat is usually very specific about what he wants in structure. Sugar and Anthony are more flexible in arrangements. And I’m the one who’s probably the most tech savvy. So sometimes I’ll come to them with multitrack demos that I’ve done … sometimes outlining exactly what I want and sometimes it’ll be just guidelines of what I think might work.
“For me writing for the Bluetones, I know the dynamics of the individual players, so I will write something in mind of what Mudcat would do. So when I’m writing, I’m hearing him in my head. A lot of that comes organically and then there are times when we have to buckle down and work on arrangements. But a lot of times, it’s just a matter of checking how it goes, and then we start playing and it sounds like the Bluetones.”
Although the Bluetones have been a fairly successful band, it’s only been recently that it has regained a foothold in the Greater Boston area. For a long time, it seemed we were only playing Rhode Island and Europe. Over the past couple of years, we are doing much better and are more visible in the Boston area than we were for a while.
Looking at the upcoming summer schedule of gigs in mid-May (with likely more to be added), Welch said the Bluetones will be fairly busy in New England.
No question the economic recession of 2007-2010 had an effect on businesses and musicians, but even before that, say around 2003-2005, “I thought it was dead, and it wasn’t coming back in our lifetime. “But I feel that the audience has come back. Predominately it’s led by the diehards (40 to 70 range), but I am seeing new faces out there. There was a time it seemed that no one was coming out. And now it feels the audience is back, but the money is not there. Clubs that have been around for years can’t afford to pay us what we used to get in the 1990s, and the places that are successful accommodate the audience with earlier starting times.”
You would think that an older crowd would embrace the earlier shows, but Mike said it’s the younger generation who are showing up earlier and possibly heading out to something else later on.
“When the economy crashed, I kept hearing, ‘When is it going to come back?’ And I always have a problem with that question because I don’t think it’s ever going to come back to where it was. I think the question has to be, ‘What’s next?’ The financial rewards are less than they used to be … touring is harder than it used to be. But there are still people playing and there are still audiences who want to hear it.”
You’re seeing musicians who are making records themselves and crowd-funding records where they make it themselves through donations. The traditional day of the record label is quickly fading out of existence.
“It’s hard to sell CDs today. A lot of labels that traditionally did well in the record store market now see a significant chunk of their sales come from selling the CDs off the stage. And that includes labels that you would think are bullet-proof and very successful, Mike said, without naming any specific label. But to their credit, they’re finding ways to survive but it’s a scary market. Because it’s somewhat of an older crowd, the blues market was slower to embrace digital downloads. Young, independent acts don’t even think about making CDs.
A lot of musicians, record labels and their audience are still trying to figure out how to work within that paradigm.
In an interview 15 years ago, Welch said, “As long as the music is honest, that’s all I can hope for. The music will change in ways that I can’t predict right now.” In May 2015 he said: “I think that statement holds true as far as the actual music I’m creating. Both I and the environment may change, but I still have to be true to where I am in the world.”