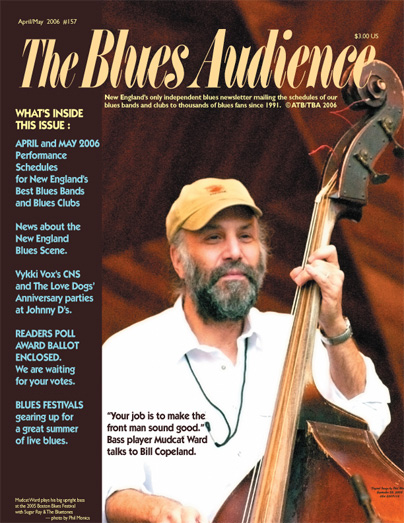 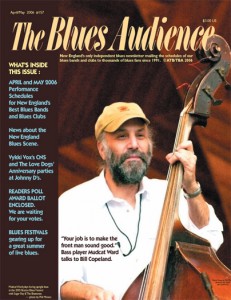 Mudcat Ward on the cover or the Blues Audience newsletter

Michael “Mudcat” Ward has been a fixture in the New England blue scene for nearly three decades. The bass player for Sugar Ray and the Bluetones has been nominated for a W.C. Handy Award, to be decided in Memphis this May and was recently named “Outstanding Bass Player” in The Blues Audience newsletter’s 2005 Reader’s Poll. The recognition is something he appreciates after living life on the road for 30 years.
“I appreciate it, especially The Blues Audience poll is one where it’s just a blank line that people write in whoever they want, which is a lot different than some of these other ones where there’s a choice of four or five, and they pick one,” Ward said. “They really have to think for a minute. All musicians that perform want to be admired or recognized for what they do.”
Ward, who has played on 42 albums and 10 compilations, did issue one caveat about polls and contests. He believes each musician has his own expression of art and that the idea of one being better than another is troublesome for him.
“I’m just a little bit put off by the competition part of it. I’m up for same thing in Memphis, the Handy Awards. It’s an honor, but at the same time, I’m weary of the concept.”
Originally from Lewiston, Maine, Ward came to the Boston area as a student at Hampshire College in Amherst, Massachusetts. He soon went into a Master’s program at Tufts University in Medford. His new friend, Ronnie Earl, who had an apartment in Brighton, got together with the bass player to form a band, called The Hound Dogs, in 1978.
The Hound Dogs became the house band at the legendary Speakeasy Blues Club in Central Square in Cambridge. Big Mama Thornton and other big names came by without a band and the Hound Dogs backed them up. At that time, Ronnie Earl formed his band The Broadcasters out of the Hound Dogs. The Broadcasters, though, had a dual identity. Earl’s line up in the Broadcasters also played out and recorded as Sugar Ray and the Bluetones (SR&BT), named after singer-harmonica player Sugar Ray Norcia.
The dual identity lasted for 12 years, until Earl left the combo to join Roomful of Blues. Earl kept The Broadcaster’s name for his solo projects and Mudcat was bassist for both bands. In fact, Earl’s second album, They Call Me Mr. Earl, has the Bluetones personnel, but the record was listed as Ronnie Earl and the Broadcasters. Mudcat was in Earl’s band, in the studio, but he was in and out as the touring bass player.
“Over 25 years we were The Broadcasters in different segments,” Ward explained. “In the 90s we were The Broadcasters for a while. We were Broadcasters in the 80s.” Despite the confusion over the names Ward felt there were two distinct bands because he was being paid by both.
Ward found himself in a situation that offered many learning opportunities for himself and his band. SR&BT has had an unusual number of encounters with his favorite players. In the early days, the band hired Big Walter Horton. They flew him out to Boston, put him up, spent lots of time with him and booked tours with him. The band then went out to Chicago to play with him. The Bluetones’ record label, Baron Records, brought Jimmy Rodgers out to New England for a series of shows and the Bluetones became his backing band. When Rodgers returned to New England for summer tours, he personally hired Ward. “Those were like working vacations for him in the summertime,” Ward said.

Read a history of Sugar Ray & The Bluetones written by Mudcat.

'Mudcat Ward' has no comments